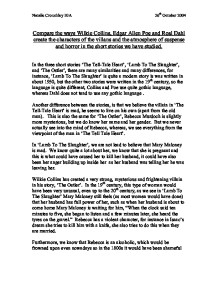 Compare the ways Wilkie Collins, Edgar Allen Poe and Roal Dahl create the characters of the villans and the atmosphere of suspense and horror in the short stories we have studied.

Compare the ways Wilkie Collins, Edgar Allen Poe and Roal Dahl create the characters of the villans and the atmosphere of suspense and horror in the short stories we have studied. In the three short stories 'The Tell-Tale Heart', 'Lamb To The Slaughter', and 'The Ostler', there are many similarities and many differences, for instance, 'Lamb To The Slaughter' is quite a modern story is was written in about 1950, but the other two stories were written in the 19th century, so the language is quite different, Collins and Poe use quite gothic language, whereas Dahl does not tend to use any gothic language . Another difference between the stories, is that we believe the villain in 'The Tell-Tale Heart' is mad, he seems to live on his own (apart from the old man). This is also the same for 'The Ostler', Rebecca Murdoch is slightly more mysterious, but we do know her name and her gender. But we never actually see into the mind of Rebecca, whereas, we see everything from the viewpoint of the man in 'The Tell Tale Heart'. In 'Lamb To The Slaughter', we are not lead to believe that Mary Maloney is mad. We know quite a lot about her, we know that she is pregnant and this is what could have caused her to kill her husband, it could have also been her anger building up inside her as her husband was telling her he was leaving her. Wilkie Collins has created a very strong, mysterious and frightening villain in his story, 'The Ostler'. ...read more.

We know that in the past the villain has had some sort of disease, he does not say what it was but we would assume that was a mental illness as he says, "The disease had sharpened my senses - not destroyed - not dulled them. Above all the sense of hearing acute" he proves the fact that he has an acute sense of hearing a few times in the story, "the beating grew louder, louder! The sound would be heard by a neighbour" the beating of the old man's heart can not have been that extreme, so the villain is obviously hearing things, this could be the first sign of guilt that we see from the villain. Dahl creates a very different villain in his short story 'Lamb To The Slaughter' . we know a lot about her and if she were a real woman, she wouldn't be the sort of person you would expect to be a villain. She is very different from the villains in the other two stories, as she has a more justified reason to kill, her husband is leaving her (we do not know why) and she kills him, she is also pregnant and this could have helped with the killing, as most pregnant woman can do some very strange and awful things and would probably not do them otherwise. At the start of the story she seems like the perfect housewife, she sits and waits for husband to come home and makes him a drink. ...read more.

Like when her husband is going to tell her something, "he had become absolutely motionless, and he kept his head down so that the light from the lamp beside him, fell across the upper part of his face. She noticed there was a little muscle moving near the corner of his left eye" This leaves the reader on the edge of their seat, wondering what will happen next. Another bit of suspense is when she has just killed her husband and we are waiting to see what will happen to her. A major difference in the way the stories are structured between the three tales is in 'The Ostler' Collins uses a very good technique by opening with the ending, this is a good way to engage the reader, as it wants to make us read on and find out what is happening to the ostler as he seems to be having a very disturbing dream and the author gives us a detailed description of the man, that leaves us asking question about what had happened to him to leave him with "prematurely wrinkled cheeks" and a withered woe-be gone face" As a conclusion, the two villains in 'The Tell-Tale Heart' and 'The Ostler' are in fact looking closely, similar and the techniques the two authors use are also similar, these two stories differ greatly from Roald Dahl's story, 'Lamb To The Slaughter'. The story that is best in building up the horror and suspense is 'The Ostler' as the story has the most mysterious character. Natalie Crouchley 10A 26th October 2004 ...read more.