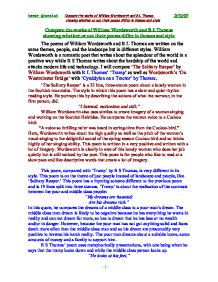 Compare the works of William Wordsworth and R L Thomas showing whether or not their poems differ in themes and style.

Compare the works of William Wordsworth and R L Thomas showing whether or not their poems differ in themes and style The poems of William Wordsworth and R L Thomas are written on the same themes, people, and the landscape but in different styles. William Wordsworth is a romantic poet that writes about the splendour of the world in a positive way while R S Thomas writes about the hardship of the world and attacks modern life and technology. I will compare 'The Solitary Reaper' by William Wordsworth with R L Thomas' 'Tramp' as well as Wordsworth's 'On Westminster Bridge' with 'Cynddylan on a Tractor' by Thomas. 'The Solitary Reaper' is a 32 line, three-stanza poem about a lonely woman in the Scottish mountains. The style in which this poem has a slow and quiet rhythm reading style. He portrays this by describing the actions of what the narrator, in the first person, did. "I listened, motionless and still;" William Wordsworth also uses similes to create imagery of a woman singing and working on the Scottish Hebrides. He compares the woman voice to a Cuckoo bird: "A voice so thrilling ne'er was heard in spring-time from the Cuckoo-bird." Here, Wordsworth writes about the high quality as well as the pitch of the woman's vocal singing to the delightful sound of the spring season Cuckoo bird and so thinks highly of her singing ability. ...read more.

A strong personification used is about the houses around the bridge: "The very houses seem asleep," This is stating that the bridge and the surroundings are so quiet in the morning that the houses look asleep. Therefore, Wordsworth has made houses do a human characteristic and so this adds to the tranquillity of the poem. This poem is another slow, positive look on the scenery by Wordsworth, but this time in an urban area. Wordsworth can still descriptively write about the scenery even in the city of London, normally presently considered 'noisy and dirty.' Nevertheless, Wordsworth has shown that even cities have beautiful landscapes that is not appreciated and rarely seen, in the morning, as most people are in bed. He wrote the poem to make people aware of the quiet and majestic scenery of London and conveys that excellent landscapes are located in urban areas. However, by today's standards, the scenery is much different, as there is a large crowd of people, litter and noisy atmosphere in London. Thomas would possibly write on this negative aspect of London, at present, in reply to this poem because of his hatred for cities. "Cynddylan on a Tractor' by Thomas is a negative poem with a few rhymes on the theme of landscape and people. The poem starts in a very direct speech to the audience: "Ah, you should see Cynddylan on a tractor." ...read more.

They both write on the themes of landscape with Thomas concentrating more on the theme of people as he was a priest in his younger age and worked with people every day. I can conclude that William Wordsworth uses a significantly more rhyming scheme than Thomas who relies on his striking metaphors and personifications to capture the audiences attention. (For example, 'On Westminster Bridge' is a sonnet and uses a very specific rhyming scheme.) From examining the four poems, I observed that Wordsworth wrote poems in a slower rhythm because of the many descriptive words than Thomas' shorter and quick pacing poems that are more to the point. These styles perhaps show that Wordsworth's poems are overall, for adults and Thomas' poems are more targeted to young people who have a wider imagination and philosophise about the countryside and modern life. I can also conclude that Wordsworth wrote poems that are from the positive side and false, to some extent, as he only describes the positives. His poems are so written in a 'happier' mood than Thomas' which are more realistic but also are biased to the negative side. Thomas' poems are generally darker, criticise on the urbanisation in the world, and show how the countryside has been forgotten as well as people of low class shown in the 'Tramp.' Dawar Qhoraish Compare the works of William Wordsworth and R L Thomas 5/10/02 showing whether or not their poems differ in themes and style - 1 - ...read more.