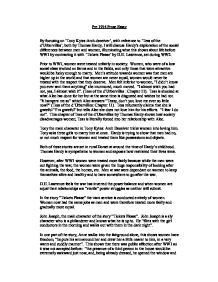 Pre 1914 Prose Essay By focusing on 'Tony Kytes:Arch-deceiver', with reference to 'Tess of the d'Urbervilles', both by Thomas Hardy, I will discuss Hardy's exploration of the social differences between men and women, illuminating what this shows about life before WW1 by contrasting it with 'Tickets Please' by D.H. Lawrence, set during WW2. Prior to WW1, women were treated unfairly in society. Women, who were of a low social class worked on farms and in the fields, and only those that were attractive would be lucky enough to marry. Men's attitude towards women was that men are higher up in the world and that women are never equal, women would never be treated with the respect that they deserve. Men felt inferior to women, "I didn't know you ever sent them anything" she murmured, much moved. "I almost wish you had not, yes, I almost wish it". ...read more.

However, after WW1 women were treated more fairly because while the men were out fighting the war, the women were given the huge responsibility of looking after the animals, the food, the homes, etc. Men at war were dependant on women to keep themselves alive and healthy and to have somewhere to go after the war. D.H. Lawrence feels the war has inverted the power balance and when women are equal their relationships are "sterile" power struggles as neither will submit. In the story "Tickets Please" the tram service is conducted entirely of women. Women now had the same jobs as men and were therefore treated more fairly and gradually more equal. John Joseph, the main character of the story "Tickets Please". John Joseph is a sly character who is a philanderer and knows what he is up to. He "flirts with the girl conductors in the morning and walks out with them in the dark night". ...read more.

Joseph lay still with his face averted "as an animal lies when it is defeated and at the mercy of the captor" (Tickets Please). In my opinion, all three stories showed off the life of men and women before and during WW1. I personally preferred "Tickets Please" rather than "Ton Kytes: Arch Deceiver" because it shows the women sticking up for themselves. I also prefer D.H. Lawrence's writing style because it is 'straight to the point' and creates an atmosphere more easily. I think that Thomas Hardy explored the social differences between men and women better by the way that in Tess of the d'Urbervilles, Tess is forced into a relationship with Alec and though she forgives Angel's pre-marital sexual encounter, which was just for fun, he rejects her, though she has suffered already. Overall, before WW1 women were unfairly treated by men. Then, during WW1, because men were out fighting, women had more responsibility and gradually earned their respect from men. Men then started to treat women more fairly and equal to themselves. ...read more.