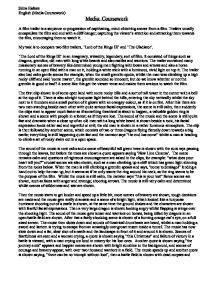 Compare two film trailers, 'Lord of the Rings III' and 'The Gladiator'.

Media: Coursework A film trailer is a sequence or progression of captivating, mind-clutching scenes from a film. Trailers usually encapsulate the film and end with a cliff-hanger; capturing the viewer's attention and attracting them towards the film, encouraging them to watch it. My task is to compare two film trailers, 'Lord of the Rings III' and 'The Gladiator'. 'The Lord of the Rings III' is an imaginary, wizardry, legendary, sort of film. It consisted of things such as dragons, gremlins, old men with long white beards and also castles and warriors. The trailer contained many missionary scenes of bravery like determined young men fighting with bows and arrows and also a horse running in an open filed with a man on it, holding a white stick with a luminous, vivid light on top it. The trailer also had calm gentle scenes for example, when the small gremlin spoke, whilst the man was climbing up a high rocky cliff and said 'come master', the gremlin sounded so innocent; but do we know whether or not the gremlin is good or bad? A scene like this get the viewer tense and makes them anxious to watch the film. The first clip shown is of some open land with some rocky hills and a sort of tall tower in the corner with a bell at the top of it. There is also a bright turquoise light behind the hills, entering the sky vertically whilst the sky next to it thunders and a small portion of it glows with an orangey colour, as if it is on fire. After this there are two men standing beside each other with quite serious facial expressions, the scene is still calm, then suddenly the clips start to appear much faster as if something theatrical is about to happen, a valuable golden ring is shown and a scene with people in a forest; as if they are lost. ...read more.

A fairly daring and audacious fight was then seen in the battle field and another quote appeared saying 'who defined an empire', throughout all of these scenes the music gradually got louder, anxious and tenser. The music then settle down and the leader spoke and asked 'who is he' the music started again but even louder and the gladiator began to say many phrases of fury and rage, for example 'father to a murdered son' husband to a murdered wife', 'and I will have my vengeance'. After this there were several different scenes revealed, for example an exceptionally large roman building, followed by more scenes from a fight and the king or emperor seemed impressed, than an audience was shown applauding. Following this there were many different scenes shown from battles and also scenes of an applauding audience. A male with a very bitter looking face was shown; I presuppose that he was an enemy. This was then followed by another special effect; a giant fire ball was shown flying over a rainforest and landed in the next scene. Then an honorary statue of homage was shown of another important Roman person. The gladiator was then shown in prison and whilst the scene was still on the statue a small boy, aged about seven or eight spoke and said 'they said you were a giant', 'I shall cheer for you'. Throughout these scenes the music was very loud and angry, whilst the music carried on like this the name of the director was shown; Ridley Scott. Then an even more furious scene was shown of men charging for a battle. Next the music started to quieten down and the gladiator was shown kissing a woman, after this the music returned back to normal, loud and angry. Subsequently scenes were shown of fury, anger, rage, violence, revenge and defeat. Then the music calmed down and a quote appeared saying 'Russell Crow', the gladiator was then shown with roses being showered over him. ...read more.

The emotional and sentimental part came into the trailer as in most clips there was a lot of battle and people dying. In a battle there are obviously deaths and only one victory, so at times death was shown and at other times victory and defeat was shown; both come under emotion. The sentimental element came in, as there was also romance within the trailer, there was a clip shown were the chief of the army was kissing another women who seemed like a princess of some sort. The 'Lord of the Rings III' trailer didn't have any emotional scenes init but more like apprehensiveness and scenes with fearfulness in them. On the whole, I think the 'Lord of the rings III' movie would have a better impact on the box office. I have come to terminate my essay with this conclusion because, although there was no age rating given, it is quite clear that this trailer had no foul language, nudity or violence in it; which made it a family movie. The trailer did have some very rare violence in it but none of the sort that could be tried at home. Also this movie will attract more viewers as it has a bigger range in age for the audience and it is a follow-on movie. People will become eager to watch the next sequel and so the movie will create an even larger audience than last time, as now much more people would have heard of the film. Also this movie trailer had a lot of voice-overs in it; these create tension and enthusiasm; making the viewers keen on the film and hence, will go and watch it. 'The Gladiator' didn't have any voice-overs and a few special effects, therefore as this trailer didn't have much of the attention grabbing material in it will not have much of an effect on the box office. Overall I think the 'Lord of the Rings III' will have a better effect on the box office and will be a much more successful movie. ?? ?? ?? ?? Sidra Hafeez English (Media Coursework) ...read more.