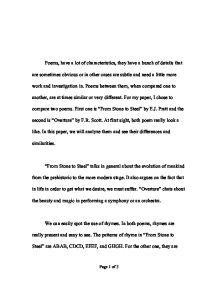 Poems, have a lot of characteristics, they have a bunch of details that are sometimes obvious or in other cases are subtle and need a little more work and investigation in. Poems between them, when compared one to another, are at times similar or very different. For my paper, I chose to compare two poems. First one is "From Stone to Steel" by E.J. Pratt and the second is "Overture" by F.R. Scott. At first sight, both poem really look a like. In this paper, we will analyze them and see their differences and similarities. "From Stone to Steel" talks in general about the evolution of mankind from the prehistoric to the more modern stage. ...read more.

In E.G.'s poem, verses measure eight syllables while in F.R.'s poem, they are eleven syllables long. Allusion is used in both poems. In "From Stone to Steel" allusion is used to make a link from the past to the present in some occasions. For example when he talks in reference to Euphrates or the Rhine in Pratt's poem. Or how stone and steel alludes to technology and power compared to rocks and primary ressources. F.R. Scott uses allusion only twice when he talks about the Mozart Sonata. The imagery used in the two poems is very different. In Pratt's poem, imagery focuses on the picture we get of the suffering we have to go through to advance in life. ...read more.

or "Constructing harmonies as sharp as stars."(l.8) In Pratt's poem, he utilizes connotation when he says that "Between the temple and the cave / The boundary lies tissue-thin."(ll.11). Alliteration is very important in Scott's poem, it emphasizes on the "R" like the one there is in Mozart since it is the main subject of the poem. Many words like dark, room, bright, sparks, dart, row, bars, stars, sharp, art, era all have "R" within. No visible or obvious alliteration is used in Pratt's poem. In conclusion, obviously, poets use different devices to decorate their poem. Both poems are really different from each other. One is dark and the other is light. They contrast a lot on this point. The poets use different devices to specify on certain important aspect of the poem. Page 1 of 4 ...read more.