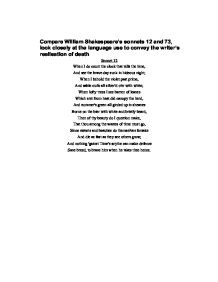 Compare William Shakespeare&amp;#146;s sonnets 12 and 73, look closely at the language use to convey the writer&amp;#146;s realisation of death

Compare William Shakespeare's sonnets 12 and 73, look closely at the language use to convey the writer's realisation of death Sonnet 12 When I do count the clock that tells the time, And see the brave day sunk in hideous night; When I behold the violet past prime, And sable curls all silver'd o'er with white; When lofty trees I see barren of leaves Which erst from heat did canopy the herd, And summer's green all girded up in sheaves Borne on the bier with white and bristly beard, Then of thy beauty do I question make, That thou among the wastes of time must go, Since sweets and beauties do themselves forsake And die as fast as they see others grow; And nothing 'gainst Time's scythe can make defence Save breed, to brave him when he takes thee hence. Sonnet 73 That time of year thou mayst in me behold When yellow leaves, or none, or few, do hang Upon those boughs which shake against the cold, Bare ruin'd choirs, where late the sweet birds sang. In me thou seest the twilight of such day As after sunset fadeth in the west, Which by and by black night doth take away, Death's second self, that seals up all in rest. In me thou see'st the glowing of such fire That on the ashes of his youth doth lie, As the death-bed whereon it must expire Consumed with that which it was nourish'd by. ...read more.

The corn takes on the image of being old, they to have a 'white and bristly beard' reflecting the old man's white hair. They also are the metaphor for the man's death; they are reaped and placed on a 'bier' signifying their own death as well as his. The writer then refers to his love, 'then of thy beauty do I question make, that thou among the wastes of time must go', he begins to question the permanence of her beauty and the reality of it. He says that her beauty will fade and decline like all things, 'wastes of time' is suggestive not only of the destruction caused by time, but of a desert, where it is endless 'wastes', where beauty will be condemned for eternity to walk in these desolate places. The following two lines are curious, 'sweets and beauties do themselves forsake, and die as fast as they see others grow', it seems as though the poet is saying that once one beauty is declining another is born to take its place. What is strange is that he says 'themselves forsake', meaning that they give up their beauty so others may have it. So even though they may die their beauty will exist forever. In Line 13 the poet uses the 'scythe' to depict an image of the grim reaper brought fourth to bring death. ...read more.

Whereas in sonnet 73 the poet has realised that he cannot escape death, and embraces this fact. Sonnet 12 very much is written in the first person 'I do count', 'I behold', to convey the poet's thoughts to the reader. While in sonnet 73, he refers much more in the second person, 'in me thou', meaning, in me you. Which involves the reader; it gives them visual imagery of the old man in his 'twilight'. The first sonnet I looked at had far more figurative language in it. This displayed the poet's I optimism of his approaching death. Whereas in the other sonnet it contains more literal language, reflecting his harsh realisation of his oncoming death. Sonnet 73 does not reflect on what has been written in as much detail as the other sonnet. This may be because he does not wish to be reminded that he has reached a certain point in his life, or cannot look back on his life with satisfaction. I believe that sonnet 73 reminds me of how precious life is, yet it must be lived so that you do not regret anything later. These two sonnets are quite sorrowing to read, because they bring the realisation to the reader that they two will die one day and leave loved ones behind. The only hope the poet offers is that the love will last for eternity, and parting will not be as grievous if the love stays true. By Cheryl Gogin ...read more.