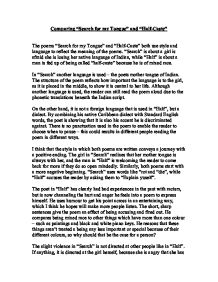 Comparing Search for my Tongue and Half-Caste

Comparing "Search for my Tongue" and "Half-Caste" The poems "Search for my Tongue" and "Half-Caste" both use style and language to reflect the meaning of the poems. "Search" is about a girl is afraid she is losing her native language of Indian, while "Half" is about a man is fed up of being called "half-caste" because he is of mixed race. In "Search" another language is used - the poets mother tongue of Indian. The structure of the poem reflects how important the language is to the girl, as it is placed in the middle, to show it is central to her life. ...read more.

I think that the style in which both poems are written conveys a journey with a positive ending. The girl in "Search" realises that her mother tongue is always with her, and the man in "Half" is welcoming the reader to come back for more if they do so open mindedly. Similarly, both poems start with a more negative beginning. "Search" uses words like "rot and "die", while "Half" accuses the reader by asking them to "Explain yuself". The poet in "Half" has clearly had bad experiences in the past with racism, but is now channeling the hurt and anger he feels into a poem to express himself. ...read more.

The slight violence in "Search" is not directed at other people like in "Half". If anything, it is directed at the girl herself, because she is angry that she has let her language slip from her mind. The poem uses imagery to good effect, comparing the tongue to a plant. The girl repeats plant related words throughout the poem, beginning with "rot", moving onto "grows strong veins" and finishing with "blossoms". As she gets more confident, the plant grows. Likewise, repetition is also used in "Half". The phrase "Explain yuself wha yu mean" is used several times. This gives the effect of the poet wanting to know what gives people the right to call him "half-caste". He thinks it is unacceptable and wants an explanation. ...read more.

This answer was written for a comparative task on the poems 'Half-Caste' by John Agard and 'Search For My Tongue' by Sujata Bhatt. There are many incidents where the candidate makes erroneous remarks and does not follow analysis through to ...

This answer was written for a comparative task on the poems 'Half-Caste' by John Agard and 'Search For My Tongue' by Sujata Bhatt. There are many incidents where the candidate makes erroneous remarks and does not follow analysis through to an extent that elicits as many marks as possible, but nonetheless the focus on the question is good. The candidate discusses in some depth the use of language, imagery and structure in order to answer the question, and each point comes with a well-sourced quotes from the poem to back up the candidates understanding. Though this answer has errors, it is clear to see this candidate has tried very hard to answer the question to the best of their ability. I would however, like to see more precise analysis given, drawing everything back to the proposed question and evidence of a more in-depth analysis with possible integration of contextual appreciation i.e. - the social and historical factors that influenced the writing of the poems (the candidate does this to an extent with regards to 'Half-Caste', but does not use this knowledge in their analysis; instead it is sort of "tagged on" the beginning).

The Quality of Written Communication is fine. There is a very basic handling of the English language which suggests this candidate may struggle the clarity of their written expression, but it is clear to see they have tried to challenge themselves with the use of complex sentences contrasting simpler sentences and a sound use of punctuation. One small irk I have though is the standard format by which all English GCSE students are required to write the poems titles in is like so: 'Half-Caste' / 'Search For My Tongue'. It is not however, acceptable to see "Half" and "Search" as substitutes. The full name of the published work must be written, with all words in the title capitalised. Also, it is a good idea to learn to difference between what instances require inverted commas and which require quotation marks. The latter are use for just that, and should only be used when quoting from a person or source material. For published works such as book or poem titles, inverted commas but be used e.g. - 'Half-Caste'.