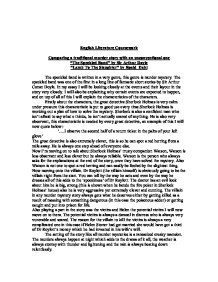 Comparing a traditional murder story with an unconventional one -

English Literature Coursework Comparing a traditional murder story with an unconventional one "The Speckled Band" by Sir Arthur Doyle "Lamb To The Slaughter" by Roald Dahl The speckled band is written in a very genre, this genre is murder mystery. The speckled band was one of the first in a long line of fantastic short stories by Sir Arthur Conan Doyle. In my essay I will be looking closely at the events and their layout in the story very closely. I will also be explaining why certain events are expected to happen, and on top of all of this I will explain the characteristics of the characters. Firstly about the characters, the great detective Sherlock Holmes is very calm under pressure this characteristic is put to good use every time Sherlock Holmes is working out a plan of how to solve the mystery. Sherlock is also a confident man who isn't afraid to say what e thinks, he isn't actually scared of anything. He is also very observant, this characteristic is needed by every great detective, an example of this I will now quote below:- '....I ...read more.

The reason for the villain to kill the victim is always a very complicated one in this case if Helen Stoner had got married she would have got a third of Dr Roylott's money which he had invested in his wife's will. The setting of the story like all murder mysteries is a ransacked creaky mansion. The murders always happen at night which adds to the drama of it all, the weather is always stormy with thunder and lightening and the rain is always beating down relentlessly. The denouement or finale/climax is where everything is suddenly explained and where there is a sudden burst of activity, in this case this is where Sherlock Holmes suddenly sees something crawling down the fake bell rope which had been installed to one of the bedrooms and he hits it with all of his might. The 'thing' that he hits then goes back to Dr Roylott's room and bites him instead, so when Sherlock Holmes enters the Doctor's room he is met by a dead body of the owner and the poisonous snake curled up on top of his head. ...read more.

Whereas in The Speckled Band we basically know who the murderer is right from the start. In 'Lamb to the Slaughter' we assume the murderer is going to be Mr. Maloney as he seems to come home in a very bad mood and he won't talk to his wife. Mr. Maloney's wife seems so innocent and it is as though all she wants is what's best for her husband. Also in lamb to the slaughter everything is over so quickly as she just comes up behind him and brains him with the frozen leg of lamb. In the story we sometimes feel quite sorry for the murderer especially after she gets told by her husband that he is going to leave her for someone else. After she commits the murder we don't really want her to get caught so we read on to see whether she gets away with it . Another difference is that there is no trusty companion in Lamb to the Slaughter that asks how everything has been done and how everything was found out. In contrast to 'the speckled band' there is also no great detective instead there is just three ordinary policemen who are investigating the murder of there collegue. ...read more.