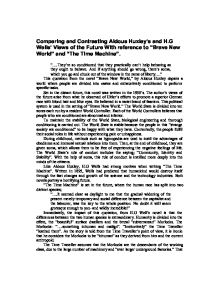 Comparing and Contrasting Aldous Huxley's and H.G Wells' Views of the Future With reference to "Brave New World" and "The Time Machine". "....They're so conditioned that they practically can't help behaving as they ought to behave. And if anything should go wrong, there's soma, which you go and chuck out of the window in the name of liberty...." This quotation from the novel "Brave New World," by Aldous Huxley depicts a world where people are divided into castes and exhaustively conditioned to perform specific tasks. Set in the distant future, this novel was written in the 1930's. The author's views of the future arise from what he observed of Hitler's efforts to promote a superior German race with blond hair and blue eyes. He believed in a racist brand of fascism. This political system is used in the setting of "Brave New World." The World State is divided into ten zones each run by a resident World Controller. Each of the World Controllers believes that people who are conditioned are abnormal and inferior. To maintain the stability of the World State, biological engineering and thorough conditioning is carried out. The World State is stable because the people in this "strange society are conditioned" to be happy with what they have. ...read more.

The Time Traveller clearly proclaims his contempt for the Morlocks and makes it very clear to the reader how much he contradicts the system of society in the future. The story of "Brave New World" is written in the third person. This is very important because detail of more than one person's view is essential. It is important to know much about the Savage, for instance, as he is distinct from the rest of the characters and plays a major role in the story. Thus, the difference between his perspective and the views of the civilised people must be distinguished because it is significant to the story. Huxley includes elements of the feelings and attitudes of the characters of Brave New World; "....the work gave him intense pleasure." In depth, this passage explains how much one is happy with his allocated place in the community using the adjective "intense." The Savage "....was ashamed of his jealousy." Unlike in "The Time Machine," the opinions of more than one character are constantly expressed thoroughly throughout the book. Bernard Marx objects to the structure of society and the philosophy of the system "freedom from pain," where no negative emotions are experienced. "He laughed," and says to his girlfriend;" "Yes, 'everybody's happy nowadays,' We begin giving the children that a five. ...read more.

In "Brave New World," brainwashing is used to achieve "happiness without pain." The idea is that, the world will be much happier if everyone is conditioned to be happy with what they have and who they are. Liberty is insufficient for specific members of the community and is only available to those of an elite. "The Time Machine", on the other hand, presents a world where evolution is used instead of conditioning, to maintain its system. As the operation of society in this book was a gradual process, the people were adapted to the prerequisites and conditions of this management. That is why everyone in this community was happy, dissimilar to Bernard in "Brave New World." It was a visitor, the Time Traveller, who perceived the horror of the future. In my opinion, the idea of Huxley's novel is more favoured as it arouses more of my interest. The reason for this is because recently, the code of the human D.N.A has being solved making it possible for conditioning in embryos to take place using the knowledge of genetic science. "Brave New World" delineates the possible outcome of us existing in a fascist regime if Hitler had won World War II. Well tries to express his fears of uncontrolled science and division between poor and rich people. I would recommend Huxley's novel more than Well's novel. The justification for my perception is that I find that "Brave New World" is a more viable situation and very prophetic. ...read more.