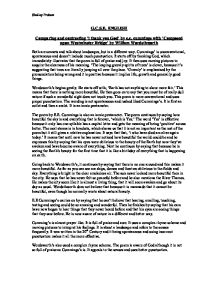 Comparing and contrasting 'i thank you God' by e.e. cummings with 'Composed upon Westminster Bridge' by William Wordsthworth.

G.C.S.E. ENGLISH Comparing and contrasting 'i thank you God' by e.e. cummings with 'Composed upon Westminster Bridge' by William Wordsthworth Both are sonnets and talk about landscapes, but in a different way. Cummings' is unconventional, spontaneous and doesn't include much punctuation. It starts off by thanking God, which immediately illustrates that the poem is full of praise and joy. It then uses moving pictures to acquire the clearness of his meaning. 'The leaping greenly spirits of trees' is clever, because it's suggesting that trees are literally jumping all over the place. 'Greenly' is emphasized by the pronunciation being wrong and it is positive because it implies life, growth and generally good things. Wordsworth's begins gently. He starts off with; 'Earth has not anything to show more fair.' ...read more.

It says that that, 'i who have died am alive again today.' It means that until now he has never noticed how beautiful the world could be and he expresses this by saying that his eyes were oblivious to the beauty of the Earth but now they've awoken and have become aware of everything. Next he continues by saying that because he is seeing the Earth's beauty for the first time that it is like a birthday of everything that is happening on earth. Going back to Wordsworth's, it continues by saying that there is no one around and this makes it more beautiful. As far as you can see are ships, domes and theatres oblivious to the fields and sky. Everything is bright in the clear smokeless air. ...read more.

It uses a complex rhyme scheme and moving pictures to interpret his feelings. It is about a landscape and refers to the senses frequently. It was written in the 20th Century and it being spontaneous and using incorrect punctuation makes it all the more effective. Wordsworth's also used a complex rhyme scheme. The poem is aware of God although it is not so full of praise as Cummings's is. It appeals to the senses and uses better punctuation. Wordsworth creates a still picture and his poem is slower then Cummings's. It was written in the 19th Century and describes a cityscape. I prefer 'i thank you God' by E.E. Cummings because of the way it is effective by using fast moving pictures and select punctuation. It is full of energy and because of its spontaneity it appears creative and very inspiring. I prefer it because it is a spontaneous overflow of emotion that is flowing and deep. Shelley Probert ...read more.