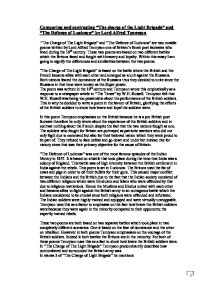 Comparing and contrasting &quot;The charge of the Light Brigade&quot; and &quot;The Defence of Lucknow&quot; by Lord Alfred Tennyson.

Comparing and contrasting "The charge of the Light Brigade" and "The Defence of Lucknow" by Lord Alfred Tennyson "The Charge of The Light Brigade" and "The Defence of Lucknow" are two notable poems written by Lord Alfred Tennyson one of Britain's finest poet laureates who lived during the 19th century. These two poems are based on two different battles which the Britons faced and fought with bravery and loyalty. Within this essay I am going to signify the differences and similarities between the two poems. "The Charge of The Light Brigade" is based on the battle where the British and the French became allies with each other and emerged as a unit against the Russians. Both nations feared the dominance of the Russians thus they decided to unite since the Russians in that time were known as the Super power. The poem was written in the 19th century and Tennyson wrote this emphatically as a response to a newspaper article in "The Times" by W.H. Russell. Tennyson felt that W.H. Russell was being too pessimistic about the performance of the British soldiers. This is why he decided to write a poem in the favour of Britain, glorifying the efforts of the British soldiers to show how brave and loyal the soldiers were. In this poem Tennyson emphasises on the British because he is a pro British poet laureate therefore he only wrote about the experience of the British soldiers and in contrast nothing about the French despite the fact that the two nations fought as one. The soldiers who fought for Britain are portrayed as patriotic warriors who did not only fight due to command but also for their beloved nation which they were proud to be part of. ...read more.

"Praise be to our Indian brothers, and let the dark face have his due!" (The Defence of Lucknow S: 5) These are highly controversial lines used by Tennyson mainly due to the fact that the poem is entirely emphasising on the Britons and so it has become permissible to use racial abuse which is very controversial. This all sums up that Tennyson's message is to tell the readers about the might of the British and how all other nations are inferior to the Britons. Every time Tennyson intends to praise the enemy immediately after that he criticises them immensely as we can see from the verse above. In "The Defence of Lucknow" Tennyson mentions the flag of the Britons he does this to represent the honour and strength of the British nation. "Floated in conquering battle..." (The Defence of Lucknow, S: 1) This verse signifies how the flag remained up in the sky and floated calmly during the battle. It also exposes the might of the British and the pride that they have for their nation. Tennyson doesn't mention the use of a flag in "The Defence of Lucknow" in contrast to "The Charge of The Light Brigade" where he doesn't consider mentioning the use of a British flag. This could be due to the fact that "The Defence of Lucknow" was a battle entirely concerning the British whereas "The Charge of The Light Brigade" was a battle where the Britons united with the French. However, Tennyson has several other ways of praising the Britons in "The Charge of The Light Brigade" which cover up for the lack of mentioning the flag in this poem. He mentions the sincerity of the Britons towards their duties. ...read more.

The poems embody the spirit of patriotism. The two poems are for the cause of Britain as they praise the Britons due to the fact that Lord Tennyson was a patriotic poet laureate. Tennyson continuously portrays how the British struggled and how they are in the minority in both battles. He does so in order to show the significance to the reader of how patriotic these soldiers were and determined to fight with utmost intensity for the cause of Britain their nation which they loved very dearly. In addition to that he also numerously mentions how eager the British soldiers were to win the battle and how courageous they were. Tennyson glorifies the Britons in the poems for their extraordinary efforts. He explains how the Britons faced an enormous task beyond their abilities in which they proceeded courageously and successfully considering the efforts they put in and how hard they fought. Tennyson displays the excellence of the British soldiers and how desperately they wanted to avoid defeat despite the fact that they were in the minority. What must be mentioned by looking at both poems is that at present numerous readers may feel offended by reading "The Defence of Lucknow" due to the fact that r****t contents are used. These are used for a specific reason but however do offend every individual from that culture. However this poem evokes sympathy from the reader because it mentions the soldiers' concern for their family. If they are to be included in the slaughtering then many innocent lives are to be taken which makes the reader sympathise for the British since they are being attacked. The soldiers who fought in the battles are described as patriots and honourable men who are role models and many people will think of their courage for they will be remembered in British history. ...read more.