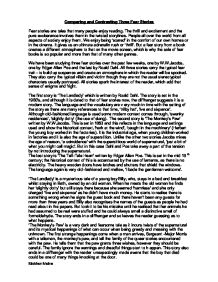 Comparing and Contrasting Three Fear Stories Fear stories are tales that many people enjoy reading. The thrill and excitement and the pure exuberance involves them in the twisted storylines. People all over the world from all aspects of society enjoy them. We enjoy being 'scared' in the comfort of our own homes or in the cinema. It gives us an ultimate adrenalin rush or 'thrill'. But a fear story from a book creates a different atmosphere to that on the movie screen, which is why the sale of fear books is so popular and more than that of many other genres. We have been studying three fear stories over the past few weeks, one by W.W.Jacobs, one by Edgar Allen Poe and the last by Roald Dahl. All three stories carry the typical fear trait - to build up suspense and create an atmosphere in which the reader will be spooked. They also carry the typical villain and victim though they are not the usual stereotypical characters usually portrayed. All stories spark the interest of the reader, which add that sense of enigma and fright. The first story is 'The Landlady' which is written by Roald Dahl. The story is set in the 1950's, and although it is dated to that of fear stories now, the cliffhanger suggests it is a modern story. The language and the vocabulary are very much in time with the setting of the story as there are many references to that time, 'trilby hat', five and sixpence'. Although old-fashioned language is used some modern context comes through, 'swanky residences', 'slightly dotty' (the use of slang). The second story is 'The Monkey's Paw' written by W.W.Jacobs. ...read more.

The presentation of the characters is one of the most important elements to the fear of these stories. The villain in 'The Landlady' is not your stereotypical, 'a man dressed in black and his face hidden' villain. But what appears to be 'quite obviously a kind and generous soul'. She is an old lady with a 'warm welcoming smile', 'about forty or fifty years old' and she has a 'round pink face and very gentle blue eyes'. The old woman is not the conventional villain and so makes it surprising to the reader, thus asking themselves questions as to how could something happen when a kind old lady is involved and wondering whether she is a villain or not and thinking that Billy is the villain and the lady the victim. She appears jolly and gentle perhaps a touch senile but harmless. Billy however, makes excuses for her as to why she is 'dotty', like saying she is like this because perhaps she 'lost a son in the war' and had 'never got over it'. This relates very much to 'The Monkey's Paw' as it also has an unconventional villain. The villain is the traveller, Sergeant-Major Morris that brings the talisman. He comes with an air of mystery and intrigue. He wins the family trust by telling deep and meaningful stories. He appears to have a strong and powerful hold over the family, 'his three listeners leaned forward eagerly', 'his manner was impressive that his hearers were conscious that their light laughter jarred somewhat'. He uses reverse psychology to tempt the family with the paw with subtle hints, 'I had three wishes from it', but still tries to put them off it, 'it has caused enough mischief already'. ...read more.

And finally at the end as to whether Mr. White will be able to stop Herbert coming back from the dead. The villain is the main build-up use for creating tension in this story, as it is him the story focuses mainly on and is the character the reader has got to know. The use of the setting also builds it up and the vulnerable old man. Will he realise? Why is the villain doing this? The use of similes, 'black as pitch with the thick darkness', the use of personification, 'because Death, in approaching him, had stalked with his black shadow before him, and enveloped the victim'. The uses of these techniques all build up the suspense the writer wants to create to make the reader feel shaken and uneasy. 'Will he get away with the murder?' is the cliffhanger, which leaves the reader hanging in suspense. The speed of the story in 'The Landlady' is much slower to that of 'The Monkey's Paw' and 'The Tell-Tale Heart'. All the stories set the scene well and build up to the climax. 'The Landlady' is the only story which doesn't pick up its pace towards the end and build into shorter pacer sentences. After reading all three stories, I decided I liked 'The Landlady'. This story I felt was easier to read and understand. The storyline was easier to pick up and follow and the language and structure of the sentencing was easier to understand. I found 'The Landlady' grabbed your attention and kept it for longer because of the drawn out storyline as to whether Billy would be okay or not. I would say younger people would find it easier to follow as well. This story appealed to me more. Siobhan Maine ...read more.