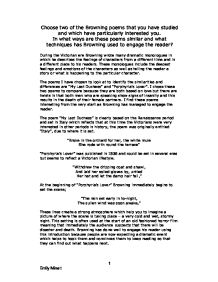 Choose two of the Browning poems that you have studied and which have particularly interested you. In what ways are these poems similar and what techniques has Browning used to engage the reader? During the Victorian ere Browning wrote many dramatic monologues in which he describes the feelings of characters from a different time and in a different place to his readers. These monologues include the deepest feelings and emotions of the characters as well as telling the reader a story or what is happening to the particular character. The poems I have chosen to look at to identify the similarities and differences are "My Last Duchess" and "Porphyria's Lover". I chose these two poems to compare because they are both based on love but there are twists in that both men who are speaking show signs of insanity and this results in the death of their female partners. I find these poems interesting from the very start as Browning has managed to engage the reader. The poem "My Last Duchess" is clearly based on the Renaissance period and set in Italy which reflects that at this time the Victorians were very interested in other periods in history, the poem was originally entitled "Italy", due to where it is set. ...read more.

"She had A heart - how shall I say? - too soon made glad, Too easily impressed" Because the assumption has been made by the reader that the Duke killed the Duchess the reader is drawn in to read more to discover the truth and whether they were correct. The main similarities between the two poems are that they are both based on men who are in love with their female partners, and that both men get very jealous of the women and crave to have them for only themselves. This desire becomes so strong that both men are willing to kill their loved ones to ensure that no one else can have them. This is shown in "Porphyria's Lover" when the man strangles Porphyria with her own hair. "In one long yellow string I wound Three times her little throat around And strangled her." This quote from nearer the end of the poem incorporates both enjambment and rhyming; it also includes a strong rhythm where each line contains eight syllables, as well as giving us an example of adjectives used. "And, stooping, made my cheek lie there," Throughout the poem the way Browning puts across the story and informs the reader of the events is very simplistic and calm. ...read more.

"Since none puts by The curtain I have drawn for you, but I," Browning has helped to hook the reader by portraying the Duke's wife as maybe being unfaithful to her husband. In "My Last Duchess" it appears that the Duke was proud that he had his wife and attempts to show her off like a possession to the passing public when he says; "Will't please you sit and look at her." This line is placed in the poem to make the reader feel that they are being invited into the story, whereas he is actually inviting the father of his new wife to take a look. Through out the poem "My Last Duchess" Browning asks many questions directed at the ambassador which can appear to be aimed at the reader, these include; "Who'd stoop to blame Thus sort of trifling?" And "but who passed without Much the same smile?" Both of these examples include emjambement which again gives a very flowing effect allowing the sentence to flow from one line to the other. "Porphyria's Lover" however is different from "My Last Duchess" because it does not include any questions and is written as more of a story whereas "My Last Duchess" manages to include the reader a lot more. ?? ?? ?? ?? 1 Emily Minett ...read more.