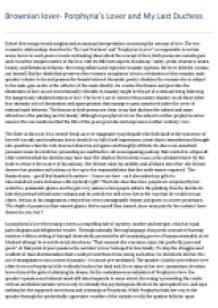 ﻿Brownian lover- Porphyria?s Lover and My Last Duchess ________________ Robert Browning reveals insights and an unusual interpretation concerning the concept of love. The two romantic relationships described in "My Last Duchess" and "Porphyria's Lover" is comparable in certain areas, however each poem reveals contrasting ideas about the concept of love. Both poems are monologues and reveal the complex nature of the love with its different aspects of jealousy, vanity, pride, obsessive desire, beauty, and flirtatious behavior. Browning inflates and explodes romantic egotism: the lover kills the woman, not himself. But the death that preserves the woman's compliance is but a celebration of the romantic male speaker's desire to fix and possess the female beloved. Romantic poetry idealizes the woman who is subject to the male gaze as she is the reflector of the male identity. He creates the illusion and provides the illustration of how an act conventionally referable to insanity might be the act of a rational being following the dangerously idealized notions of love. ...read more.

The death of the Duchess was a cold, calculated move by the Duke to remove the source of his jealousy. She did not value his nobility and all that it stood for; she did not deserve her position as Duchess, or live up to the responsibilities that her noble stance required. ?She thanked men, - good! But thanked Somehow - I know not how - as if she ranked my gift of a nine-hundred-years-old name with anybody?s gift.? The Duke describes how people are surprised by her seductive, passionate glance, and he gets very jealous when people admire the painting, thus he decides to hide the portrait behind some curtains and he acts like he still owns her in the way that he would own an object. He has, in his imagination, reduced his wives unimaginable beauty and grace, to a mere possession. ?The depth of passion in that earnest glance, But to myself they turned, since none puts by the curtain I have drawn for ...read more.

Browning's presenting the reader with an unreliable narrator serves only to intensify the psychological effects of his unrequited love, and says nothing for the supposed convictions and yearnings of Porphyria. While Porphyria finds her way to the speaker through the symbolically oppressive weather of the outside world, the speaker kills her upon realizing not only society's restrictions on their relationship, and maybe also his belief of Porphyria's own unwillingness to love him fully. Thus in freezing the moment and liberating the two of them from social structures, Browning distorts the deed to a point where it appears to be a divine event foreseen even by God. In toying with Porphyria's dead body, the narrator relates not the coldness of sudden death, nor the warmth of sitting with his love, but the blazing, untouchable serenity of enacted passion. While the suggested insanity of the speaker would traditionally indicate the narrator's unreliability in a moral sense, Browning constructs the isolated scene such that the lover's emotional internalization is understandable. ...read more.