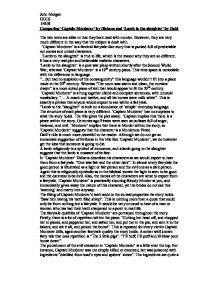 Comparing 'Captain Murderer' by Dickens and 'Lamb to the slaughter' by Dahl.

Comparing 'Captain Murderer' by Dickens and 'Lamb to the slaughter' by Dahl The two texts are alike in that they both deal with murder. However, they are very much different in the way that the subject is dealt with. 'Captain Murderer' is a farcical fairytale-like story that is packed full of predictable out comes and unreal characters. 'Lamb to the slaughter' is true to life, which is the reason why they are so different. It has a very real plot and believable realistic characters. 'Lamb to the slaughter' is a post war piece written shortly after the Second World War, whereas 'Captain Murderer' is a 19th century piece. This time space is noticeable with the difference in language. "...but had no suspicion of the consanguinity" this language wouldn't fit into a piece made in the 20th century. Whereas "The room was warm and clean, the curtains drawn" is a more suited piece of text that would appear to fit the 20th century. 'Captain Murderer' is strung together clich� and complex sentences, with unusual vocabulary. "... ...read more.

'Captain Murderer' is practically shouting b****y Murder at you, and immediately gives away the nature of this character, yet the brides do not see this 'warning' and marry him anyway. The filing of Captain Murderer's teeth adds to the surreal properties the story holds. "Saw him having his teeth filed sharp". This is nothing more than a quote that could only be from nothing but a fairytale. It would be very unusual to hear of a man or woman who has had their teeth sharpened to a point in real life. The fairytale qualities of 'Captain Murderer' are portrayed throughout the story. Firstly, there is a lot of repetition within the piece. "Cutting her head off, and chopped her in pieces, and peppered her, and salted her, and put her in the pie, and sent it to the bakers, and ate it all, and picked the bones". This is repeated for every victim Captain Murderer kills, again another fairytale quality the story holds. Another well known fairy tale that uses repetition is "The 3 little pigs". ...read more.

Or perhaps she was always evil. In just a few paragraphs she turns from the perfect housewife to the perfect killer. Looking back over 'Lamb to the slaughter' I can understand why Patrick wanted to leave, as her love was too obsessive and suffocating. The somewhat contrasting storylines are simply because of the Era in which they were created. 'Captain Murderer' was made in the 19th century, but with echoes of an even earlier tradition. It has a strong Moral Ending which would be expected of the time. However 'Lamb to the slaughter' is a modern piece, its modern audience accepts a more realistic ending it is gentler with less graphic horror "Mary Maloney began to giggle" The two stories do deal with murder but in radically different ways. 'Lamb to the slaughter' uses a very effective storyline "twist", where the innocent turns out to be evil. 'Captain Murderer' uses the traditional villain stereo type, portraying "in your face" evil features of Captain Murderer's character such as his teeth, not to mention his name. John Morgan HCCS 34103 ...read more.