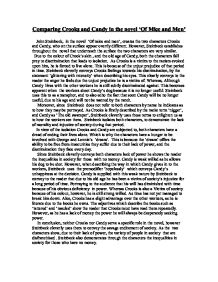 Comparing Crooks and Candy in the novel 'Of Mice and Men'

Comparing Crooks and Candy in the novel 'Of Mice and Men' John Steinbeck, in the novel 'Of mice and men', creates the two characters Crooks and Candy, who on the surface appear overtly different. However, Steinbeck establishes throughout the novel that underneath the surface the two characters are very similar. Due to the colour of Crook's skin , and the old age of Candy, both the characters fall prey to discrimination that leads to isolation. As Crooks is a victim to the r****m evoked upon him, he is forced to live alone. This is because of the unjust prejudice of that period in time. Steinbeck cleverly conveys Crooks feelings towards his discrimination, by the statement 'glittering with intensity' when describing his eyes. ...read more.

As Crooks is firstly described by the r****t term 'n****r', and Candy as 'The old swamper', Steinbeck cleverly uses these terms to enlighten us as to how the workers see them. Steinbeck isolates both characters, to demonstrate the lack of morality and injustice of society during that period. In view of the isolation Crooks and Candy are subjected to, both characters have a dread of ending their lives alone. Which is why the characters have a hunger to be involved with George and Lennie's 'dream'. This is because the 'dream' offers the ability to be free from insecurities they suffer due to their lack of power, and the discrimination they face every day. Since Steinbeck cleverly conveys both characters lack of power he shows the reader the inequalities in society for those with no money. ...read more.

Whereas Crooks is also a Victim of society because of his colour, however, he is still strong willed. As time has not yet managed to break him down. Also, Crooks has a slight advantage over the other workers, as he is literate due to the books he owns. The adjectives which describe the books such as 'tattered' and 'mauled' show the reader that Crooks must have read them repeatedly. However, as he has a lack of money the power he will always be desperately seeking power. In conclusion, neither Crooks nor Candy serve a specific role in the novel, however Steinbeck cleverly uses them to convey the savage enditement of society. As the two characters show, due to their lack of power, the variety of people in society that are disfranchised . Steinbeck also demonstrates through the characters the inequalities in society for those who have no money. ...read more.

The points in this essay are apt and relevant; however they are under developed and the whole response is too short for an essay at GCSE level.