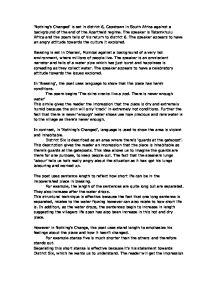 'Nothing's Changed' is set in district 6, Capetown in South Africa against a background of the end of the Apartheid regime. The speaker is Tatamkhulu Africa and the poem tells of his return to district 6. The speaker appears to have an angry attitude towards the culture it explored. Blessing is set in Dharavi, Mumbai against a background of a very hot environment, where millions of people live. The speaker is an omniscient narrator and tells of a water pipe which has just burst and happiness is spreading as they collect water. The speaker appears to have a celebratory attitude towards the issues explored. In 'Blessing', the poet uses language to show that the place has harsh conditions. ...read more.

In contrast, in 'Nothing's Changed', language is used to show the area is violent and inhabitable. District Six is described as an area where there's 'guards at the gatepost'. This description gives the reader an impression that the place is inhabitable as there's guards at the gateposts. This idea allows us to imagine the guards are there for one purpose, to keep people out. The fact that the speakers lungs 'labour' tells us he's really angry about the situation as it has got his lungs labouring and worked up. The poet uses sentence length to reflect how short life can be in the impoverished place in blessing. ...read more.

For example stanza five is much shorter than the others and therefore stands out. Separating this short stanza is effective because it's his statement towards District Six, which he wants us to understand. The reader will get the impression his statement is sharp and extremely important to him as he separates it. In Blessing, it's flowing and isn't separated as much as nothing's changed to show a very happy scene unlike Nothing's Changed. Ultimately, both poems have been really effective in portraying their cultures as they have both used language and structure effectively however Nothing's Changed appears to be more effective as the speakers message and feelings about District Six are portrayed very effectively allowing the reader to imagine the speakers feeling vividly. ...read more.