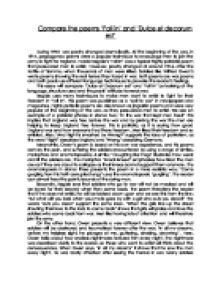 Compare the poems 'Fall in' and 'Dulce et decorum est' During WW1 war poetry changed dramatically. At the beginning of the war, in 1914, propaganda poems were a popular technique to encourage men to join the army to fight for England. Harold Begbie's 'Fall In' was a typical highly patriotic poem that persuaded men to enlist. However, poetry changed at around 1916, after the Battle of Somme, when thousands of men were killed. Soldiers like Wilfred Owen's wrote poems showing the real terrors they faced in war. Both poems are war poems and both poets use different language techniques to provoke the reader's feelings. This essay will compare 'Dulce et Decorum est' and 'Fall in' by looking at the language, structure used and the poets' attitude towards war. Begbie uses many techniques to make men want to enlist to fight for their freedom in 'Fall In'. This poem was published as a 'call to war' in newspapers and magazines. Highly patriotic poems are also known as jingoistic poems and were very popular at the beginning of the war, as they persuaded men to enlist. ...read more.

Owen believes that soldiers will be destroyed and traumatised forever after the war; 'In all my dreams, before my helpless sight, he plunges at me, guttering, choking, drowning'. Here, Owen talks about how endless nightmares tortured him every night. The nightmare was described vividly to the reader, so those who want to enlist will think about the consequences. When Owen says, 'In all my dreams' it shows that he saw the man every night. He was badly affected after seeing the horrors in war. Many soldiers were badly traumatised after the war and had to be taken to a psychiatric hospital. This is the opposite picture Begbie creates; there are no cheerful soldiers being chased by women. Thirdly, Begbie uses a question and answer structure to make the reader question why they are not going to war. For instance, 'How will you fare, sonny, how will you fare in the far-off winter night' is one of Begbie's questions which occur at the beginning of each stanza. The poem assumes that man is going to live. Most people are scared of death at war, but the way that Begbie assumes the reader will survive makes the reader think that it is an easy war and, so, it is not a problem joining the army. ...read more.

The words; 'The old Lie' proves that Owen disagrees with it being sweet and right to die for your country. We also see that Owen has a negative attitude towards other propaganda poets. For example; 'My friend, you would not tell with such high zest' proves that he is against men being told to enlist; 'My friend' implies that Owen is talking to a propaganda poet such as Begbie. He does not mean 'My friend' and is using sarcasm. He blames the propaganda poets for making so many men think war is good and making them enlist, causing many deaths. Many people, when war was just announced, were extremely eager for it to start since they thought war would be over in a few months. The saying; 'Over by Christmas' was what everybody expected. However, the war lasted much longer then that-a total of four years. After the Battle of Somme attitudes started to change dramatically, since hundred thousands of soldiers were being killed per day! Wilfred Owen started writing about what the soldiers had to confront during this time, and war did not seem so honourable. ...read more.