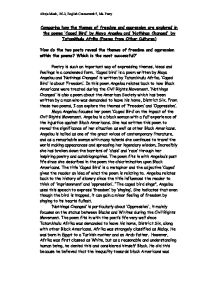 Comparing how the themes of freedom and oppression are explored in the poems 'Caged Bird' by Maya Angelou and 'Nothings Changed' by Tatamkhulu Afrika (Poems from Other Cultures) 'How do the two poets reveal the themes of freedom and oppression within the poems? Which is the most successful?' Poetry is such an important way of expressing themes, ideas and feelings in a condensed form. 'Caged bird' is a poem written by Maya Angelou and 'Nothings Changed' is written by Tatamkhulu Afrika. 'Caged Bird' is about 'Freedom'. In this poem Angelou relates back to how Black Americans were treated during the Civil Rights Movement. 'Nothings Changed' is also a poem about the American Society which has been written by a man who was demanded to leave his home, District Six. From these two poems, I can explore the themes of 'Freedom' and 'Oppression'. Maya Angelou focuses her poem 'Caged Bird' on the impact of the Civil Rights Movement. Angelou is a black woman with a full experience of the injustice against Black Americans. She has written this poem to reveal the significance of her situation as well as other Black Americans. Angelou is hailed as one of the great voices of contemporary literature, and as a remarkable woman with many talents she continues to travel the world making appearances and spreading her legendary wisdom. ...read more.

There is no pattern of syllables in any lines, but there is a rhyme scheme used to make the text stand out and emphasise important parts of the poem. Also, all the way through the poem 'enjambement' has been used where there are strong definite emotions involved. 'Enjambement' is a standard poetic technique which indicates outpouring information. It is the continuation of a line into the next line, the continuation of the meaning, without a pause or break, from one line of poetry to the next. Maya Angelou has also used 'repetitive stanzas' which help to stress out and emphasise important parts. The structure of 'Nothings Changed' is regular and it doesn't contain rhyme. Therefore, it doesn't have any kinds of rhyming scheme, but each stanza contains eight lines. Tatamkhulu Afrika has structured the poem like this because it will allow the poem to stand out in the readers mind. Also, we have noticed that every stanza ends with a full stop, which allows the poem to flow from one point to another. Afrika has also used 'caesuras' which allow the reader to get alert because whatever is about to come is very important to the moral of the poem. ...read more.

Afrika has also used 'assonance' in his poem. This is the repetition of similar or identical vowel sounds in words which follow each other. 'Caged Bird' is a poem with a great meaning written by a talented poet who has full experience of the Civil Rights Movement, in her poem she has written about 'how to gain freedom'. She does this by using the solution of 'singing' to free ones mind from oppression. However, Afrika who is a man that values humanity has very cleverly written his poem 'Nothings Changed' to bring about the seriousness of 'Oppression'. In conclusion, I prefer Maya Angelou's 'Caged Bird' because from my knowledge, this poem seems to make more sense to me. I believe this because as I read this poem, I can get ideas of what the moral of the poem is, and what message Angelou is trying to reveal. I also think that 'Caged Bird' is most successful in its presentation of the themes of 'freedom' and 'oppression' because this poem goes right to the point, right to the moral of the message, it doesn't leave any gaps in your mind, and you are able to question your thoughts as you read the poem. ?? ?? ?? ?? Afroja Meah, 10L2, English Coursework 5, Ms. Perry ...read more.