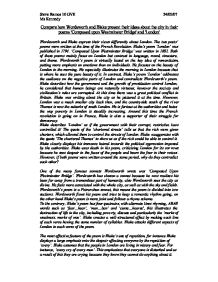 Compare how Wordsworth and Blake present their ideas about the city in their poems 'Composed upon Westminster Bridge' and 'London' Wordsworth and Blake express their views differently about London. The two poets' poems were written at the time of the French Revolution. Blake's poem 'London' was published in 1794. 'Composed Upon Westminster Bridge' was written in 1802. Both of these poems mainly focus on London but contrast in language, mood, structure, and theme. Wordsworth's poem is virtually based on the key idea of romanticism, putting more emphasis on emotions than on individuals. He focuses on the beauty of London in the morning. He especially illustrates the morning in London because that is where he sees the pure beauty of it. In contrast, Blake's poem 'London' addresses the audience on the negative parts of London and contradicts Wordsworth's poem. Blake describes how the government and the growth of prostitution control London, he considered that human beings are naturally virtuous, however the society and civilisation's rules are corrupted. At this time there was a great political conflict in Britain. Blake was writing about the city as he pictured it at the time. ...read more.

Whereas 'mind-forged manacles' is a negative point and describes the chains as if they have imprisoned people's thoughts. Wordsworth creates an image in the reader's mind that is so vivid, that the reader can picture oneself on that very bridge. The Earth is personified and Wordsworth uses hyperbole 'Earth has not anything to show more fair', this tells us he has never seen anything so amazing. In the fourth line, the city is personified by the quote 'This City now doth, like a garment wear', a garment is any article of clothing, and this describes the city as if it was wearing fine clothing. In the fifth line, 'The beauty of the morning; silent, bare...' this displays a breathtaking imagery of the morning sky of how it's completely clear. In the eighth line the imagery quote, 'All bright and glittering in the smokeless air', shows us the image of purity and clearness. By Wordsworth using his unique references to nature all through the poem, he paints a vision in the reader's mind. In the twelveth line, the river is being personified by 'The river glideth at his own sweet will', this shows us a relevant view of London. ...read more.

The sun lights up the city in light and gives the reader a sense of purity and cleanliness. The quote 'Earth has not anything to show more fair', illustrates to us Wordsworth claims that London is much better than God's natural creations. However, 'London' affects the reader with an opposite feeling, as the reader sees the city of London which cannot be saved. These two poems reflect the poets' perspectives because firstly, Blake was a Londoner, so as he lived his life in London he probably saw the real image of London and secondly, as Wordsworth was passing through in the morning , he would of just seen the beauty of the morning not the pollution later on. On the other hand, both poems have similarities, such as they both talk about London as well as using the same context, they were both written around the early 19th Century and they both personified the Thames because both poets see the river Thames as a very important part of London. Blake describes the Thames as 'Chartered Thames', which shows us that it is controlled by the rich, whereas Wordsworth describes the Thames as the 'Mighty heart', which gives us the impression that the Thames is a living thing. ?? ?? ?? ?? Steve Ramos 10 GVE 24/05/07 Ms Kennedy ...read more.