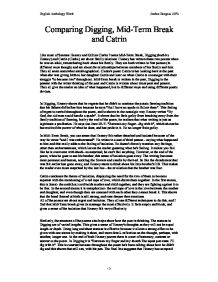 Comparing Digging, Mid-Term Break and Catrin Like most of Seamus Heaney and Gillian Clarke Poems Mid-Term Break, Digging (both by Heaney) and Catrin (Clarke) are about family relations. Heaney has written these two poems when he was an adult, remembering back about his family. They are both written in first person (in different ways though) and are about the relationships between members of his family and him. They all seem somewhat autobiographical. Clarke's poem Catrin is her looking back at the past when she was giving birth to her daughter Catrin and later on when Catrin is a teenager with their struggle "to become two" throughout. Mid-Term break is written in the past, Digging in the present with the writer thinking of the past and Catrin is written about times past and present. They all give the reader an idea of what happened, but in different ways and using different poetic devices. In Digging, Heaney shows that he regrets that he didn't to continue the potato farming tradition that his fathers did before him because he says "But I have no spade to follow them". This feeling of regret is carried throughout the poem, and is shown in the nostalgic way Heaney writes "By God, the old man could handle a spade". It shows that he feels guilty from breaking away from the family tradition of farming, but by the end of the poem, he realises that what writing is just as legitimate a profession. ...read more.

This is broken at the end, which helps to give the last line a strong effect because it feels out of place and against the rhythm. The last stanza being one line long makes it stand out and cause greater impact on the reader's mind. The final stanza is "A four foot box, a foot for every year". This answers questions such as "Who is the brother" and "How old is he". It is said in quite a shocking way with the connection of length and how young he was. This adds to the feel of tragedy. Catrin uses two uneven stanzas, to show the two different times. Stanza one shows the past, when Catrin was being born, and the second shows the present were they are arguing. Stanza one contrasts the mundane things happening in the city like "people and cars taking turn at the traffic lights" while momentous events of people's lives were happening just nearby in the hospital. The summarising paragraph technique Heaney uses isn't present in Catrin, however the last lines "As you ask may you skate in the dark, for one more hour" is a change from the preceding lines. The lines that came before were a description of Catrin, and what mother and daughter were feeling, and the change in focus from description to action. ...read more.

The use of contrast in the poems makes the reader think about the objects being compared. It gives more information about what is happening and how it affects normal people, their emotions and actions. The contrast is most effective in Mid-Term break, because it shows the effect the death has on the family, in the way the people actions changed, and how they are different from normally expected. The contrast from the sterile environment of the fifth stanza, with the brother being referred to as the corpse, and the sixth, where it become more personal shows how Heaney has accepted his brother death, and while still sad has got rid of the shock that made him isolated in the preceding lines. All three of these poems use different techniques to convey how they saw memory and the past. Digging makes us guess emotions, which can make the poem more immediate, and Catrin uses a contrast between the past. But overall I would say the Mid-term Break is the most effective. It presents the poet's memory in the best way. It makes the reader feel like they really are in a memory of his thanks to his strong decryptions of what was going on and the emotions of his family. This, combines with the shock and sadness the poet was obviously feeling at the time, and gives the reader great empathy for him. ?? ?? ?? ?? English Anthology Work Jordan Burgess 10P2 -1- ...read more.