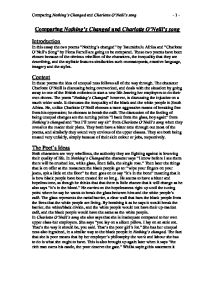 Comparing Nothing's Changed and Charlotte O'Neill's song Introduction In this essay the two poems "Nothing's changed" by Tatumkhulu Afrika and "Charlotte O'Neil's Song" by Fiona Farrell are going to be compared. These two poems have been chosen because of the obvious rebellion of the characters, the inequality that they are describing, and the stylistic features similarities such onomatopoeia, emotive language, imagery and the styles. Content In these poems the idea of unequal ness follows all of the way through. The character Charlotte O'Neill is discussing being overworked, and deals with the situation by going away to one of the British colonies to start a new life-leaving her employers to do their own chores. The poem "Nothing's Changed" however, is discussing the injustice on a much wider scale. It discusses the inequality of the black and the white people in South Africa. He, unlike Charlotte O'Neill chooses a more aggressive means of breaking free from his oppression; he chooses to bomb the caf�. The discussion of the feeling of being unequal changes are the turning points "I back from the glass, boy again" from Nothing's changed and "but I'll never say sir" from Charlotte O'Neill's song when they reveal to the reader their plans. ...read more.

This is also brought up again later when it says "the rich man earns his castle, the poor deserve the gate." Whilst saying this statement it takes on a slightly mocking tone. Charlotte appears to work much harder than her employers but she still, in her employer's eyes, is not worthy of as much as he or she, the rich one, is. Mood or atmosphere As I mentioned before, both poems display strong feelings of bitterness towards the ones affecting their lives. They do not appear aggressive apart from at the very end of Nothing's Changed. Fiona Farrell lists the chores that the character has had to carry out. She gives the impression that she is very over worked, and that she is stuck there. The character shows a lot of rebellion by deciding to leave-to go on the "Isabella Hercus" across the seas to the colonies. The atmosphere in this poem is set by the short, sharp sentences, which in most cases make you read faster. The author keeps it in the past tense until the third stanza, where she changes it to future. In this paragraph the character explains her plans, with the future tense adding a tone that suggests this is what will happen, this also makes her sound even more resentful about her past treatment. ...read more.

He repeats the word "and" several times, especially in stanza two. This gives a similar impression to the listing in Charlotte O'Neill's song. They build up the emotion and in Nothing's Changed invoke anger and in Charlotte O'Neill's Song the feeling that charlotte is getting treated unjustly. Nothing's changed gathers emphasis using onomatopoeia (crunch, click etc.) to set the scene. It also highlights the bad points of the character's situation to move the reader to his point of view of the issue. Conclusion As I have said many times before, the people in these poems are angry and bitter about their mistreatment. Both characters play the underdogs, offered unfair lives due to their position in the world, which is decided simply because of one thing. These two things make them victims of people assuming that they are 'lesser beings'. These poems are both have a message, no matter how different people seem they are really the same. Monetary and racial differences create huge divides, with the rich believing themselves better than the poor, and in some cases human being judging each other on a single unchangeable feature. The characters in the two poems both aim to break free of the oppression put upon them because of these differences. After all, how different can we all be? Comparing Nothing's Changed and Charlotte O'Neill's song - 1 - ...read more.