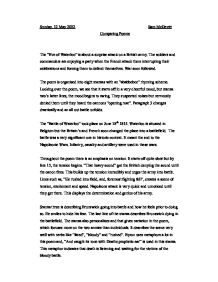 Sunday, 12 May 2002 Sam McDevitt Comparing Poems The "Eve of Waterloo" is about a surprise attack on a British army. The soldiers and commanders are enjoying a party when the French attack them interrupting their celebrations and forcing them to defend themselves. War soon followed. The poem is organised into eight stanzas with an "ababbcbcc" rhyming scheme. Looking over the poem, we see that it starts off in a very cheerful mood, but stanza two's latter lines, the mood begins to swing. They suspected noises but nervously denied them until they heard the cannons "opening roar". Paragraph 3 changes drastically and an all out battle unfolds. The "Battle of Waterloo" took place on June 18th 1815. Waterloo is situated in Belgium but the Britain's and French soon changed the place into a battlefield. The battle was a very significant one in historic context. ...read more.

Byron uses metaphors a lot in this poem and, "And caught its tone with Deaths prophetic ear" is used in this stanza. This metaphor indicates that death is listening and waiting for the victims of the b****y battle. Stanzas four, five and six are about the cavalry going into war accompanied by the marching music, "Cameron's gathering". The soldiers in the cavalry can't believe that in one hour, they've gone from celebrating to preparing for battle. The last two stanzas of the poem sum it up well. They go from celebrating and fun to battle and death. It gives a clear show of the poet's views and opinions. He looks upon the battle and describes it with verbs like "green leaves" and "grass" but contrasts them with "grieves" and "strife". In the very last line of the poem, Byron writes what I feel is the most powerful line in the poem, "Rider and horse, - friend, foe, - in one red burial blent". ...read more.

This suggests the dominance and sheer brute force of the Assyrians. The first two stanzas display the power of the army very well. They appear over the hill, their spears gleaming. They are compared to a wave, which is ready to take the country out. As it continued down the hill, it grew faster and stronger until it crashed over the Israelites. The power in the first stanza is a huge contrast with the latter ones. The Assyrians are strong and have their weapons but the Angel of Death protects the Israelites, - poisoning the Assyrians. This has morale to the story. You don't have to be big and strong to win the war. The good will prevail. The two poems are very different. In the "Eve", the two armies both have weapons and are very strong but in the "The Battle", the Assyrians have the advantage as they have weapons and are a strong force. Another difference is that a miracle occurs to win the war in the "The Battle", whereas strength and power wins it in the "Eve". Sam McDevitt ...read more.

This essay intends to compare to poems but very few comparisons are made, meaning that it doesn't really fulfil its purpose. When comparing poems do it throughout the essay, identifying both similarities and differences between the pieces.