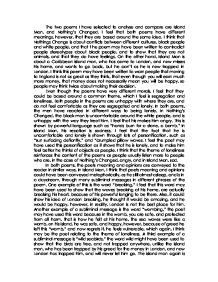 The two poems I have selected to analyse and compare are Island Man, and Nothing's Changed. I feel that both poems have different meanings, however, that they are based around the same idea. I think that Nothings Change is about conflicts between different cultures, black people and white people, and that t he poem may have been written to contradict people stereotypes about black people, and to show that they are not animals, and that they do have feelings. On the other hand, Island Man is about a Caribbean island man, who has come to London, and now misses his home, and wants to go back, but he can't as he is now trapped in London. I think this poem may have been written to warn people that moving to England is not as great as they think, that even though you will earn much more money, that money does not necessarily mean you will be happy, so people may think twice about making their decision. Even though the poems have very different morals, I feel that they could be based around a common theme, which I feel is segregation and loneliness. Both people in the poems are unhappy with where they are, and do not feel comfortable as they are segregated and lonely. In both poems, the men have reacted in different ways to being lonely, in Nothing's Changed, the black man is uncomfortable around the white people, and is unhappy with the way they treat him. I feel that his makes him angry. This is shown by powerful language such as "hands burn for a stone, a bomb." In Island Man, his reaction is sadness. I feel that the fact that he is uncomfortable and lonely is shown through lots of personification, such as "sun surfacing defiantly," and "crumpled pillow waves. I feel the poet may have used this personification as it shows that he is lonely, and to make him feel better he thinks of objects as people. ...read more.

This could show that he feels that nothing will ever change, and there is one cycle, and that he could have given up hope of anything changing. Another example of using the structure of the poem to add effect is when the fourth stanza is broken up into two stanzas; one with two lines and one with six lines, all of the other stanzas all have eight lines. I feel that this could be because the last line of the stanza with two lines says "but we know where we belong," I feel that this is showing there is nothing more to it, it will always be like that, and nothing he says will change it. This could be another sign that the poet has given up hope, and feels that nothing will ever change. In Island Man, there is a lot more use of structure and form, an example of this is the same as in Nothing's Changed, the poem is a cycle. There is no punctuation in the poem, so it never stops, this could be the poet saying that the Island man's life in London is just one big boring cycle. Another reason I think the poem is a cycle are the last words, "another London say." This may be showing every London day is the same, and this is just another, I think this could be reinforced with words such as "dull" and "grey" which give a impression of something that is boring. Another example is the space between the words "he always comes back" and "groggily groggily." I think this gap could be there as it is the space between his dream and reality, and also, asleep and awake. The final example of the use of structure and form is when you turn the poem on its side, the poem can be interpreted as many pictures, this could be a coincidence, or the poet may have done this on purpose. ...read more.

The poet could be saying that you will face many problems at first, and will have to work very hard, and that once you leave home, you miss it, and will regret not appreciating it. I think that there could also be another message from the poet, which is that you should appreciate everything about your home, as some people, who are not there anymore, as you may not be at some time in the future, and they miss home dearly. I agree with the poet that you should always appreciate your home, and that it is true that some people move as they want more money, however, money does not necessarily mean happiness. It is my opinion that the poet is also right in saying you should always value your home, as when you are there, you do not, however, when you are not there anymore, you wish you had appreciated it more. One aspect of the poem I disagree with is that the island man is saying that life in London is always the same, and that nothing fun ever happens, as I feel sometimes the man must have fun, even if it is on rare occasions, and that the poet could be being slightly pessimistic. I believe that the poem is being used for a very different reason to Nothing's Changed, and that it is written to show people from other countries that London isn't the same as they think it is, and to think twice before emigrating there. Also, the poet could be saying that you should not rush into moving for the sake of something as petty as money and that before you do, make sure you know that it is definitely what you want to do. The poem has made me consider the fact that there are people in the world who are unhappy with where they are as they made a rash decision, and that before I ever make a big decision, think it through properly, considering the negative aspects as well. ...read more.