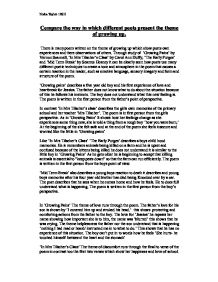 Compare the way in which different poets present the theme of growing up. There is many poem written on the theme of growing up which show poets own experiences and there observations of others. Through study of 'Growing Pains' by Vernon Scannell, 'In Mrs Tilscher's Class' by Carol Ann Duffy, 'The Early Purges' and 'Mid Term Break' by Seamus Heaney it can be clearly seen how poets use many different poetic techniques to create a tone and atmosphere in the poem that causes a certain reaction in the reader, such as emotive language, sensory imagery and form and structure of the poem. 'Growing pains' describes a five year old boy and his first experience of love and heartbreak for Jessica. The father does not know what to do about the situation because of this he follows his instincts. The boy does not understand what this new feeling is. The poem is written in the first person from the father's point of perspective. In contrast 'In Mrs Tilscher's class' describes the girls own memories of the primary school and her teacher 'Mrs Tilscher'. The poem is in first person from the girls perspective. As in 'Growing Pains' It shows how her feelings change as she experiences some thing new, she is told a thing from a rough boy 'how you were born,' At the beginning of the she felt safe and at the end of the poem she feels insecure and worried like the little in 'Growing pains' Like 'In Mrs Tilscher's Class' 'The Early Purges' describes a boys child hood memories. ...read more.

This is shown by 'In the porch I met my father crying/He had taken funerals in his stride.' this shows that someone in the family has pasted away and that the father was close to that person. We also se the mothers reaction to the death 'as she coughed out angry tearless sighs.' The two adjectives 'angry' and 'tearless' suggest that she is fighting and she it trying to support her son and husband and to not get her emotions take the better of her. The young age of the boy is shown through is reaction to the death, at the beginning of the poem it suggests that he does not know that his brother has died there is not reference of him crying and his observations of his brother are to the point this could indicates that he is in shock. Also he does not understand what is happening just like the boy in 'Growing Pains 'and 'Early Purges' In 'Growing Pains' Metaphors are used to show how upset he is 'The darkness whimpered' this describes he is crying in the dark. The word 'whimpered' makes us think of a scared animal ' His eiderdown/ untidy carpet on the floor' this shows that the boy is upset. Diction shows how upset the boy is 'distraught' is means very upset and distressed. ' Blurred' shows that he was crying. ...read more.

died has four and that it was a great shock for such a young boy to died at such a young age. 'Growing pains' It is a narrative poem the tone is very conversational there is enjambment ' he seemed quite happy there until/ three weeks after at night,' this gives the affect of the father telling the story this is also show in the use of speech. The poem has not got verses, a regular rhythm or a regular rhyme which further gives the feel of a piece of prose. This also shows that the fathers confusion and concern. However the last two lines there is a rhyming couplet. The father is comforting his son the rhyme give the poem a type of lullaby affect. 'In Mrs Tilscher's class' it is a narrative poem each verse describes a part of a child's life in chronological order. There is no regular rhyme or rhythm enjambment used this gives a affect of reading prose. The poem dived in four the first two verses are both have 8 lines in them and the last to verses have 7 lines in them this shows that the mood changes. In the first two verses the poet describes the safety the childhood. In the last two verses the safety has changed by the knowledge "of how you were born" as the child reaches puberty. The early purges and mid term break still to do Nisha Taylor 10SH Mr Phelan ...read more.