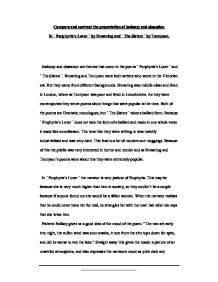 comparing porphyria's lover and the sisters

Compare and contrast the presentation of jealousy and obsession In ` Porphyria's Lover ` by Browning and ` The Sisters ` by Tennyson. Jealousy and obsession are themes that occur in the poems ` Porphyria's Lover ` and ` The Sisters `. Browning and Tennyson were both writers who wrote in the Victorian era. But they came from different backgrounds. Browning was middle-class and lived in London, where as Tennyson was poor and lived in Lincolnshire. As they were contempories they wrote poems about things that were popular at the time. Both of the poems are Dramatic monologues, but ` The Sisters ` takes a ballard form. Because ` Prophyria's Lover ` does not take the form of a ballard and reads in one whole verse it reads like a confession. The time that they were writing in was heavily industrialised and was very dark. This lead to a lot of murders and muggings. Because of this the public was very interested in horror and murder and as Browning and Tennyson's poems were about this they were extremely popular. In ` Porphyria's Lover ` the narrator is very jealous of Porphyria. This may be because she is very much higher than him in society, so they couldn't be a couple because if anyone found out she would be a fallen woman. ...read more.

This is where the narrator is giving Porphyria kisses and cuddling up to her. It is like he is saying to her that he has got her forever. At the end of the poem the narrator gets over confident. "And all night we have not stirred, and yet God has not said a word!" Here the narrator thinks that he has got away with the murder of Porphyria, and that he is again, so obsessed with her that he is just going to sit there all night with her. In `The Sisters ` one of the sisters is jealous of the other sister because she finds the other sister better looking than her. The result of this jealousy between them is the jealous sister kills the other sister. Then because the remaining sister is really obsessed with the Earl, she kills him as well! Because of these two murderings, it portrays the sister as psycho. Pathetic Fallacy, like in ` Prophyria's Lover ` gives us the sound of dramatic weather "The wind is blowing in turret and tree." Again it gives us a view of a slightly unsettled atmosphere where it could get worse. The weather also reflects the effect that the Earl has on the sister. ...read more.

At the end of ` The Sisters ` she " Wrapped the body in a sheet, and laid him at his mothers feet." "His mothers feet" could be that the sister has put the body of the Earl underneath a painting of his mother in the house. Or that now he is dead he can now be looked after by his dead mother. Also "O the Earl was fair to see," is used at the end of every verse. But even after the Earl is dead the sister still says this, which again shows how obsessed she is with him. Both ` Porphyria's Lover ` and ` The Sisters ` dealt with Jealousy and Obsession as their main themes. ` Porphyria's Lover ` is more involved in jealousy as its main feeling, this is because the narrator was always jealous of Porphyria's higher social standing. Compared to ` The Sisters, ` where this concentrates on obsession. This is because the sister was so obsessed with the Earl that she would stop at nothing to keep he Earl hers forever. Also now that the Porphyria and the Earl are dead, the narrator and the sister are now in control. ?? ?? ?? ?? ____________________________ ...read more.