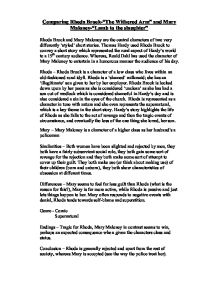 Comparing Rhoda Brook-"The Withered Arm" and Mary Maloney-"Lamb to the slaughter" Rhoda Brook and Mary Maloney are the central characters of two very differently 'styled' short stories. Thomas Hardy used Rhoda Brook to convey a short story which represented the rural aspect of Hardy's world to a 19th century audience. Whereas, Roald Dahl has used the character of Mary Maloney to entertain in a humorous manner the audience of his day. Rhoda - Rhoda Brook is a character of a low class who lives within an old-fashioned rural idyll. Rhoda is a 'shamed' milkmaid; she has an 'illegitimate' son given to her by her employer. Rhoda Brook is looked down upon by her peers as she is considered 'unclean' as she has had a son out of wedlock which is considered shameful in Hardy's day and is also considered a sin in the eyes of the church. Rhoda is represented as a character in tune with nature and she even represents the supernatural, which is a key theme in the short story. Hardy's story highlights the life of Rhoda as she falls to the act of revenge and then the tragic events of circumstance, and eventually the loss of the one thing she loved, her son. ...read more.

She was "holding the thin bone -end of it," in her hand as she went up the stairs when she got into the living room where she saw her husband standing by the window. So she paused for a bit when he said "For god sake, Don't make supper for me. I am going out." At that moment she was so mad that she went up behind him and hit him over the head with the leg of lamb. She was so shocked that she stood there looking at the body for a while until she said to herself, "So what if I've killed him." Her mind was so clear and fast now because as the wife of a detective she knew exactly what the penalty was for such a crime. She thought about what they would do with her since she had an unborn child, but she did not know and she was not prepared to take a chance. She came up with the idea of pretending that nothing had happened and that she would put the leg of lamb into the cooker and go to the local grocers where she would buy something for his tea. So she practised saying what she would say to the grocer. ...read more.

Still numb, she carries it into the living room and without warning bashes her husband over the head with it. As she looks at Patrick lying dead on the floor, she slowly begins to come back to her senses. Immediately she realizes the ramifications of what she has done. Not wanting her unborn child to suffer as a result of her crime, she begins planning her alibi. She places the leg of lamb in a pan in the oven and goes down to the corner grocery to get some food for "Patrick's dinner" (making sure the grocer sees her normal and cheerful state of mind). She returns home and screams when she finds Patrick lying on the floor. She calls the police and informs them that she found her husband lying dead on the floor. Within hours swarms of officers are searching the house and conducting an investigation. Mary's story of coming home from the grocer and finding him is corroborated as she had planned. While the police are searching fruitlessly into the night for the murder weapon, Mary offers them some lamb that she had prepared for dinner. They are happy to oblige. While they lounge in the kitchen and discuss the case (their mouths "sloppy" with meat), Mary Maloney sits in the living room and giggles softly to herself. ...read more.