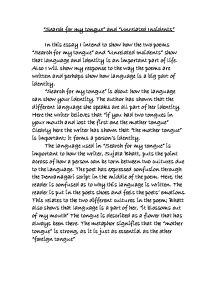 Finally the third part explains to the English reader what is spoken in Gujarati and the writers true emotions are coming out. The poet has used two languages in the second part of the poem. Firstly there is the Denranagari script which then shows pronunciation also written; so it seems the woman is speaking it, not writing it. The poem "Unrelated Incidents" is about how the poet, Tom Leonard, is putting the message across that he chooses to consider that accent does not show the status of a person. Whereas tin "Search for my tongue" the importance of identity is shown through language; similarly "Unrelated Incidents" also shows how language is part of your identity. The language in "Unrelated Incidents" is portrayed through the Glaswegian accent of the writer; this reinforces whatever he is saying. In contrast, to "Search for my tongue" in "Unrelated Incidents" Leonard has used phonetic spelling "this is ma trooth" the "ma" is used to state that it is his accent and he's proud of it. ...read more.

Unlike "Search for my tongue", Leonard has written his entire poem in his language; this strengthens the idea that language is closely linked to a persons identity. The Glasgow dialect "yi canny talk" signifies the poets' message. The main difference between both the poems is that "Unrelated Incidents" is written mostly through sarcasm, "this trooth wia voice lik wonna yoo scruff" the writer is stating that speaking in Standard English is the truth. Obviously the poet is being sarcastic and ironic. The poet is making a point that you don't need to speak Standard English to be talking about the truth. Unlike "Search for my tongue" where it does not show any irony used by Bhatt. To conclude Leonard has used Glaswegian accent to signify that the language a person uses is a big part in their identity; just like Sujata Bhatt where the language reveals the identity. In Bhatt's poem she proves that identity is constantly changing no matter where you are, it always is a part of you. ?? ?? ?? ?? ...read more.