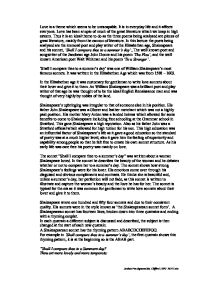 Love is a theme which seems to be unescapable. It is in everyday life and it affects everyone. Love has been a topic of much of the great literature which we keep in high esteem. Thus it is an ideal theme to do as the three poems being analysed are pieces of great literature, mainly from the cannon of literature. In this lecture the poets being analysed are the immoral poet and play writer of the Elizabethan age, Shakespeare and his sonnet, 'Shall I compare thee to a summer's day', The well known poet and songwriter of the Jacobean age John Donne and his poem 'The Flea', and the well known American poet Walt Whitman and his poem 'To a Stranger'. 'Shall I compare thee to a summer's day' was one of William Shakespeare's most famous sonnets. It was written in the Elizabethan Age which was from 1588 - 1603. In the Elizabethan age it was customary for gentleman to write love sonnets about their lover and give it to them. As William Shakespeare was a brilliant poet and play writer of that age he was thought of to be the ideal English Renaissance man and was thought of very highly by nobles of the land. Shakespeare's upbringing was irregular to that of someone else in his position. ...read more.

Donne was however able to write the poem 'The flea' which is a slightly happier poem about a woman he loves. 'The flea' describes a tiny blood withdrawing mite which happens to have sucked a droplet of the Donne's and his mistress's blood. Ironically he uses the ugliest, most reviled pest to associate with a pure, probably coy mistress in his attempt to finish his courtship of her. Nevertheless, he manages well. In verse one, the writer enthuses about the 'how little' the thing she is denying him is. He slowly begins to build up his argument by saying that being bitten is not a 'sin'. He talks about how the flea differs in its approach to her. The flea just jumps up and bites her, while he is painstakingly putting his every effort into wooing her like a gentleman. Donne almost sounds deprived here. In verse two he begs her not to kill the flea, as it is the symbol of their love, and the only place where they are married is in 'these living walls of Jet.' He says that although many things are against them, she must not kill it as that would be killing him and it would be 'sacrilege,' as it is their 'marriage temple'. If it dies all hope of them dies In verse three, she kills the flea, cruel and suddenly. ...read more.

This theme is not typical of this era in time as not many poets wrote about love. This poem is similar to the other two poems discussed earlier in that its theme is love and it discusses the poets love for an individual however in this poem the idea that love should not be displayed openly is portrayed by this poet. Shakespeare was a openly passionate poet and most of his works were on love. His attitude towards love was that your feelings towards someone should be shared and that everyone should experience love. Unlike Shakespeare John Donne was not as openly passionate writer of love songs although he did write many love songs. He chose to be intellectual when discussing this topic as was the common thing to do of his time. Walt Whitman however, was not an open love poetry writer at all as it was against the stereotype man image of his time and many of his poems were about war. His feelings towards love were that it was between a man and a woman and that it should not be openly published. Although the three poets all wrote love poems their views on how the poems should be written were different mainly due to the era they lived in, however this difference did not topple the fact that they are all great poets. Joshua Van Egmond Ms. Clifford 12W2 Assignment ...read more.