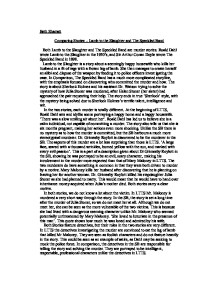 Comparing Stories &amp;#150; Lamb to the Slaughter and The Speckled Band

Beth Sharratt Comparing Stories - Lamb to the Slaughter and The Speckled Band Both Lamb to the Slaughter and The Speckled Band are murder stories. Roald Dahl wrote Lamb to the Slaughter in the 1950's, and Sir Arthur Conan Doyle wrote The Speckled Band in 1898. Lamb to the Slaughter is a story about a seemingly happy housewife who kills her husband in a fit of rage with a frozen leg of lamb. She then manages to create herself an alibi and dispose of the weapon by feeding it to police officers investigating the case. In Comparison, The Speckled Band has a much more complicated storyline, with the emphasis focused on discovering who committed the murder and how. The story is about Sherlock Holmes and his assistant Dr. Watson trying to solve the mystery of how Julia Stoner was murdered, after Helen Stoner (her sister) had approached the pair requesting their help. The story ends in true 'Sherlock' style, with the mystery being solved due to Sherlock Holmes's terrific talent, intelligence and wit. In the two stories, each murder is totally different. At the beginning of LTTS, Roald Dahl sets and idyllic scene portraying a happy home and a happy housewife. 'There was a slow smiling air about her'. Roald Dahl has led us to believe she is a calm individual, not capable of committing a murder. ...read more.

In comparison, the detectives in the SB are responsible for telling the story and solving the murder. They are portrayed to be intelligent, respectable, professional characters unlike the detectives in LTTS. The two stories are very different in terms of language; both in the content and the way it is used. Generally, the language in the SB is more descriptive with longer words and a more intricate manner. The language used in LTTS is, comparatively, simpler and less detailed. This is typical of Dahl's style, who remains famous for his children's stories. One main difference in the language of these two stories comes from the angle that they are told. The LTTS is written from the point of 'the third person'. This means the story is being told from the outside. This is different to the SB, which is being told by one of the characters in the story, Dr Watson. This gives the SB a more anecdotal touch. 'The events in question occurred in the early days of my association with Holmes'. This is an example of some of the more reflective language used in the SB. In reading the two stories it is very noticeable that the average length of sentences and paragraphs in the SB is considerably greater. In LTTS the text is broken up at frequent intervals by dialogue. This dialogue is usually quite short, no more than a couple of sentences unlike some of the dialogue in the SB which can be more 'speech - like'. ...read more.

At the beginning of LTTS, Mary Maloney is carrying out tasks as she does each day in what seems an almost rehearsed fashion. This sense of routine that has been created allows actions that seem only slightly out of the ordinary to heighten the tension of the atmosphere. In this case, something as trivial as Mr Maloney not wanting any supper creates unease and a change to the atmosphere. '"I don't want it," he said. She moved uneasily in her chair, the large eyes still watching his face.' Here the tension is heightening. During LTTS, as it is a short story, the atmosphere does not change dramatically many times, unlike during the SB. Events throughout this story cause the atmosphere to develop and change in different ways. One example is when Dr. Grimesby Roylott enters Sherlock's home. Sherlock and Watson are talking of the mystery that has just been told to them when he enters. 'But what in the name of the devil' exclaimed Holmes. The atmosphere changes to a more sinister and tense tone. The endings of the stories have a strong contrast. In the SB, the murder is solved, with the murderer being foiled and the detectives seeming to be the victors. This is unlike the ending of LTTS, where the mystery has not been solved and the murderer is the 'seeming victor'. Both endings contain an element of surprise. In the SB the irregularity of the details the murder supply the surprise and in LTTS Mary Maloney's laughter leads us to believe she is not as incorrupt as she seems. ...read more.