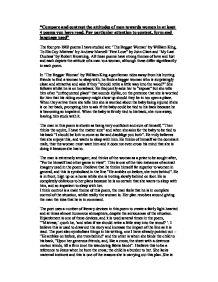 "Compare and contrast the attitudes of men towards women in at least 4 poems you have read. Pay particular attention to content, form and language used" The four pre-1900 poems I have studied are: 'The Beggar Woman' by William King, To His Coy Mistress' by Andrew Marvell 'First Love" by John Clare and 'My Last Duchess' by Robert Browning. All these poems have strong themes of love and l**t and each depicts the attitude of a man to a woman, although these differ significantly in each poem. In 'The Beggar Woman' by William King a gentleman rides away from his hunting friends to find a woman to sleep with, he finds a beggar woman who is surprisingly clean and attractive and asks if they "should retire a little way into the wood?" She follows whilst he is on horseback. He frequently asks her to "expose" but she tells him of an "unfrequented place" that sounds idyllic, on the pretence that she is worried for him that his riding company might show up should they be in too open a place. When they arrive there she tells him she is worried about the baby being injured if she is on her back, prompting him to ask if the baby could be tied to his back because he is becoming so impatient. When the baby is firmly tied to his back, she runs away, leaving him stuck with it. ...read more.

The woman in this poem is obviously shy, as the title says. I think this is related to her being reluctant to have s*x with him. In "To His Coy Mistress" I think that the poet has created a simple but effective rhythm with rhyming couplets. There are many metaphors and similes in this poem, and I believe the poet wrote them to help illustrate the scene he has created. They make the poem more exciting and lifelike, and are implemented by the man in the poem to make his argument more convincing. For example, "But at my back I always hear Time's winged chariot hurrying near:" is more effective than simply stating that she won't be young and pretty forever. "My echoing song: the worms shall try that long-preserved virginity" he says harshly, trying even to disgust her into sleeping with him. He is creating images in her head, and I think they work perfectly. The third poem is "First Love" by John Clare. The attitude of the man in this poem to the woman is extremely different to those of the first two poems I studied. This poem portrays a man's first glimpse of a woman he has never met before with whom he falls in love. There are three clear sections in this poem, and they show the progression of his feelings. To begin with the man is struck dumb by the beauty of this woman, with "love so sudden and so sweet". ...read more.

He takes great pride in material objects such as paintings bronze statues, and is very proud to show them off. They seem more important to him than his wife, which furthers my sense of him being a callous and brutal man. "I call that piece a wonder, now" he says when describing the painting, yet does not show even a glimpse of remorse for what he did. His attitude to women is that if they benefit his reputation and are extremely respectful to him and no other people, he will tolerate them. Otherwise, however, they are nothing to him, and neither is the cost of human life. The way this poem is written seems almost like prose, aside from the rhyming. The poet makes frequent use of dramatic pauses such as "Or blush, at least. She thanked men, - good! But thanked-". This helps to dictate a sense of rhythm in his speech. The poem is a monologue and uses a complex system of punctuation, as well as caesura and the effect of this is very dramatic. In all of these poems the attitudes of the men towards the women are different, and in each poem the way the men feel about women in general contrast greatly. The one thing I have noticed that remains the same in each poem, however, is that the man always wants something from the woman, whether it is love, s*x, or respectable behaviour. This is the only link I can see but I believe it is an important one. ...read more.