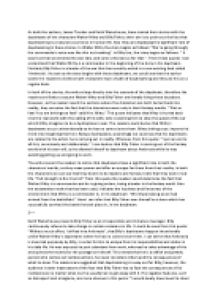 Comparing the characters of Walter Mitty and Billy Liar.

﻿As both the authors, James Thurber and Keith Waterhouse, have started their stories with the daydreams of the characters Walter Mitty and Billy Fisher; their aim is to point out the fact that daydreaming is a natural occurrence in human life. Also they are displaying the significant role of daydreaming in these stories. In Walter Mitty the story begins as follows: ?We?re going through; the commander?s voice was like thin ice breaking?. In Billy Liar, the story begins as follows: ?? It was true that we entered the war late, and some criticised us for that.??. From these quotes I can understand that Walter Mitty is a commander in the beginning of the story in his daydream. Similarly Billy Fisher is a leader of the war that has recently ended in a non-existing land called ?Ambrosia?. As soon as the story begins with these daydreams, we could see that the author wants the readers to believe both characters have a habit of daydreaming and they do this on a regular basis. In both of the stories, the writers leap directly into the scenario of the daydream, therefore the readers are likely to assume Walter Mitty and Billy Fisher are literally living these situations. ...read more.

The readers are suggested that daydreaming is a way out for Billy; however, the audience is later made aware of the fact that Billy Fisher has to face the consequences of his recklessness no matter what, but he usually lies to get away with it. His negative features, such as disrespect and arrogance, are more obvious in this quote: ?I would dearly have loved to shout at gran in the same situation?. Also this quote indicates how discourteous he is, especially towards his own family members. 3---- James Thurber portrays Walter Mitty as the submissive character in his relationship with his wife. This could be seen from this quote:? She would want him to be there waiting for him as usual?, as Mitty is continuously being ordered to do things by his wife and he has no choice but to accept. Since the dominant character being Mrs. Mitty, Walter Mitty is sick and tired of the repetitiveness of these demands hence ends up fantasising of a world where he is the one who commands others to do things. The audience is suggested that daydreaming is an escape for Walter Mitty, even though it is done unconsciously. ...read more.

Also the adjectives being used are linked to the traits that he lacks as a male, they also indicate that he has no fear in being shot, he is determined even in an extremely dangerous situation as such. He is well sure that he would be respected for dying for the sake of saving other people?s lives. However the audience is aware that Mitty is a reserved and passive individual, he is very likely to be forgotten by people once he dies in that same spot from any other reason. When comparing the two shooting scenes in the daydreams, it could be said that they are quite different from each other. This is because Walter Mitty is the one who is sacrificing himself for his nation, which makes the readers feel sorry for him. On the other hand, Billy Fisher is the one using the repeater gun and shooting people who he dislikes. From this, the readers can see the immature behaviour being carried out. Although the roles differentiate the two scenes, the similarity is that they both achieve what they want. Walter Mitty desires respect and honour; whereas, Billy Fisher wants to rid himself from the constant complaints and blames he gets from the people. ...read more.