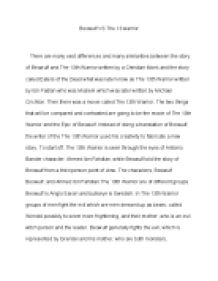 Comparing the movie of The 13th Warrior and the Epic of Beowulf.

Beowulf generally fights the evil, which is represented by Grendel and his mother, who are both monsters, descendants of Cain, alone. The warriors of The 13th Warrior and Beowulf, clearly, had reasons for fighting the Grendle, his mom, the Dragon, and the Wendola. Beowulf wanted to be famous and Bullseye and his men just wanted to help out. Beowulf was more of a super hero type unlike the men in The 13th Warrior. Bullseye and his comrades were not offered money or any reward; they did not so much want to be remembered for their heroic deeds at Herot. They just wanted to help save the place. Like Beowulf and Bullseye, Grendel and the Wendol had reasons for attacking Herot. ...read more.

There are a few scenes in The 13th WarriorÂ that compare to scenes in Beowulf. When Bullseye and his men were attacked by the Wendols in the small hut, they fought for a while and the Wendols fled back into the night to their cave. This scene is correspondent to when Beowulf defeated Grendel in the mead-hall. Grendel fled back into the night, down to his cave under the waters of the lake. After these scenes in Beowulf and The 13th Warrior another event takes place that is much like each other. Beowulf is asked to find Grendel mother and slay her as well. He searches for hours in the lake until he finds her and goes and fights her in the cave. Beowulf slaughters her here In The 13th Warrio Bulllseye and his comrades murdered the Wendol mother, just as Beowulf had done to Grendel mother. ...read more.