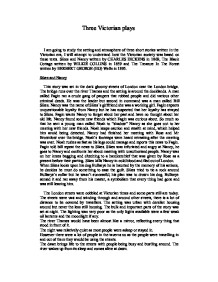 Comparing the setting and atmosphere of Sikes and Nancy written by CHARLES DICKENS in 1869, The Black Cottage written by WILKIE COLLINS in 1859 and The Treasure In The Forest written by HERBERT GEORGE (HG) Wells in 1895.

Three Victorian plays I am going to study the setting and atmosphere of three short stories written in the Victorian era, I will attempt to understand how the Victorian society was based on these texts. Sikes and Nancy written by CHARLES DICKENS in 1869, The Black Cottage written by WILKIE COLLINS in 1859 and The Treasure In The Forest written by HERBERT GEORGE (HG) Wells in 1895. Sikes and Nancy This story was set in the dark gloomy streets of London near the London bridge. The bridge runs over the river Thames and the setting is around the docklands. A man called Fagin ran a crude gang of paupers that robbed people and did various other criminal deeds. He was the leader but second in command was a man called Bill Sikes. Nancy was the name of Sikes`s girlfriend she was a working girl. Fagin expects unquestionable loyalty from Nancy but he has suspected that her loyalty has strayed to Sikes. Fagin wants Nancy to forget about her past and have no thought about her old life. Nancy found some new friends which Fagin was curious about. So much so that he sent a young man called Noah to "shadow" Nancy as she goes out to her meeting with her new friends. Noah keeps caution and stealth at mind, which helped him avoid being detected. ...read more.

Jerry and Shifty d**k went away and Bessie went inside. The ruffians returned later and talked to Bessie, she foolishly told them that she was alone. They picked up the stones and threw them at the door increasing in power and rate after each stone, they were trying to break the door down and enter forcefully. Bessie was very venerable at that stage and still she managed to keep her nerve. Bessie put more logs on fire and lit all the candles as this made her keep her nerve. She saw her cat Polly crouched up and panic stricken in a corner, she felt so close to the little creature and wanted to ease its trouble. She went upstairs and put the little cat beside her bed. She kept on looking outside the window and there was a thick desperate tension in the air that made her think the end was inevitable. After the villains broke in and Bessie fled with the pocket book, she heard shouting as if they were going to apprehend her. The voices started to drown as she moved farther away from the cottage. The weather was unfavourable to the villains as it was raining heavily and there was a lot of mist in the air. The sheer blanket of darkness that engulfed the moorland made it impossible for the thieves to see even a few feet in front their own eyes. ...read more.

They eventual decided to leave the body and take a few gold ingots as they couldn't take any more weight. They carried the ingots in a stretcher type contraption using Evans jacket. Suddenly Evans let his half of the jacket drop and grabbed his throat, he went against a tree and said, "it'll be alright in a minute." He cried out in pain and fell to the floor crouching on his side, he was moving rashly and spasmodically. Hooker knew the plant, he had seen a tribe of jungle people use it as poison in their blow darts. Evans told Hooker to take the ingots and get out of there, Hooker packed up the ingots into Evans jacket. While he was doing this he felt a little p***k on the ball of his thumb, he pulled the thorn out and endeavoured in vain to suck the poison out, there was nothing he could do for Evans or himself. Hooker never really thought about Chang-chi but he thought what the map had said, "my secret is well guarded." Hooker knew finally what he had meant by this and just imagined his grin while looking at his companion. Evans who was twitching like a fish on dry land with its last breath at any moment and Hooker crouched while sitting could do nothing more than become statues of failure in their dire hour. ...read more.