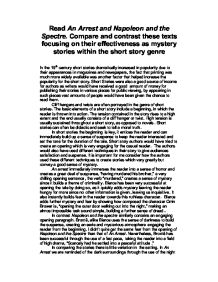 Read An Arrest and Napoleon and the Spectre. Compare and contrast these texts focusing on their effectiveness as mystery stories within the short story genre In the 19th century short stories dramatically increased in popularity due to their appearances in magazines and newspapers, the fact that printing was much more widely available was another factor that helped increase the popularity for the short story. Short Stories were also a good source of income for authors as writers would have received a good amount of money for publishing their stories in various pieces for public viewing, by appearing in such pieces vast amounts of people would have been given the chance to read them. Cliff hangers and twists are often portrayed in the genre of short stories. The basic elements of a short story include a beginning, in which the reader is thrown into action. The tension contained in the story rises to a high extent and the end usually consists of a cliff hanger or twist. High tension is usually sustained throughout a short story, as opposed to novels. Short stories can often be didactic and seek to tell a moral truth. ...read more.

Bront� has been effective in the way she created a mysterious feel about the story as the reader is left guessing till the end. Alike Napoleon and the Spectre, Bierce has also been effective in conveying a suitably tense atmosphere allowing the reader to feel uneasy. He explains how susceptible Orrin Brower is by describing the difficulty of his task, "got no weapon," building the suspense and allowing the reader to feel anxious. This is extended when Bierce uses "bloodhounds," allowing the reader to assume the prospect of vicious dogs on Brower's tail and the reality he faced. The mysterious atmosphere is emphasised when Brower is alone with the unknown character, "they entered the town, which was all alight, but deserted." Comparing to Bronte, Bierce uses much less description when referring to the ghost The presence of the supernatural is hinted when Bierce describes what is in the sight of Brower, "saw the visible embodiment of Law lift its arm and point," this is an example of the gothic conventions. A combination of short and long sentences steps up the climax of the story, ".....him. ...read more.

This ending backs up the moral meaning of justice held throughout. In comparison to the ending used by Bierce, I was rather disappointed in Napoleon and the Spectre, since the mystery built up in the story does not end with a major incident. The length of the paragraph also adds to the straightforwardness of the finale, "the Emperor immediately fell into a fit of catalepsy, in which he continued during the whole of that night and the greater part of the next day." Personally I think that Bronte was not very effective in concluding her story as it lets the reader down. In conclusion I found both stories well constructed and effective, however I found An Arrest more effective as a mystery short story. Since, although it was short and concise, Bierce has been very effective in displaying the tension and providing a climatic ending which satisfies the reader. I thought that in general Napoleon and the Spectre was quite effective in providing suspense and mystery however I feel that Bronte could have allowed the atmosphere around the Spectre to seem more threatening. I also think that she could have given a more successful ending since I did not find it convincing which did not live up to the story. ...read more.