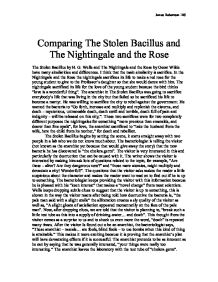 Comparing The Stolen Bacillus and The Nightingale and the Rose

Comparing The Stolen Bacillus and The Nightingale and the Rose The Stolen Bacillus by H. G. Wells and The Nightingale and the Rose by Oscar Wilde have many similarities and differences. I think that the main similarity is sacrifice. In the Nightingale and the Rose the nightingale sacrifices its life to make a red rose for the young student to give to the Professor's daughter so that she would dance with him. The nightingale sacrificed its life for the love of the young student because the bird thinks "love is a wonderful thing". The anarchist in The Stolen Bacillus was going to sacrifice everybody's life that was living in the city but that failed so he sacrificed his life to become a martyr. He was willing to sacrifice the city to rebel against the government. He wanted the bacteria to "Go forth, increase and multiply and replenish the cisterns, and death - mysterious, untraceable death, death swift and terrible, death full of pain and indignity - will be released on this city,". These two sacrifices were for two completely different purposes the nightingales for something "more precious than emeralds, and dearer than fine opals", for love, the anarchist sacrificed to "take the husband from the wife, here the child from its mother," for death and rebellion. The Stolen Bacillus begins by setting the scene, it starts straight away with two people in a lab who we do not know much about. ...read more.

Because he is in so much love he is oblivious to the fact that the girl may have just said that to keep the young student quiet. The boy is optimistic like the anarchist was optimistic that if he got the bacillus he had the power to wipe out the city. The young student almost drifts off in to dreams about the girl and himself dancing but every dream ends with the fact that he has, "no rose to give her" this emphasises how much he wants to dance with the girl and therefore how much he needs the rose. This repetition of certain lines is similar to the repetition of the word, "death" in the Stolen Bacillus, both writers use similar techniques to create similar effects. The nightingale really did feel for the young student's, "mystery of Love" and felt it was his duty to do something about it. The nightingale went to three different rose trees, (showing that the bird will go to great lengths to get a red rose) the first two trees said that it was impossible to make a red rose. The third tree said that there was a way "but it is so terrible that I dare not tell it to you" to which the bird replied, "I am not afraid" this again shows the determination the bird has to get a red rose. To got the red rose the nightingale, "must build it out of music by moonlight, and stain it with your own heart's-blood" implying that the bird must sacrifice its life to get the red rose. ...read more.

The bird referring to the rose as a symbol of love had said, "it is more precious than emeralds, and dearer than fine opals". The young student then throws the rose (which is all that is left of the nightingale) on to the road which is run over by a cart-wheel. The girl calls the young student as being, "only a student" as if he is not worth anything. The young student then says "what a silly thing Love is" which is also contradicting what the bird said at the beginning. The young student then reverts back to studying as if nothing has happened, as if he was ungrateful of what the bird has done for his love. Both the sacrifices were pretty pointless sacrifices because in the Stolen Bacillus the anarchist does not achieve his goal (which was to wipe out the city) instead he turned green, and in the Nightingale and the Rose the bird had sacrificed its life for love, but no love came of it, in fact, less love came of it because the young student realised what a silly thing love is. The anarchist sacrificed his life so that bad things could come of it but no bad things did, the nightingale sacrificed its life so that good could come of it but instead bad things did. Although The Nightingale and the Rose was a very sad, touching story with complex language I think I preferred the humorous and interesting story of the Stolen Bacillus because of its realism. ?? ?? ?? ?? James Robertson 10S ...read more.