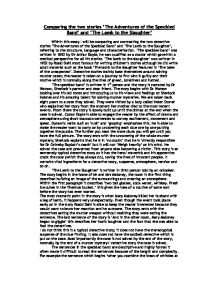 Comparing the two stories 'The Adventures of the Speckled Band' and 'The Lamb to the Slaughter'.

Comparing the two stories 'The Adventures of the Speckled Band' and 'The Lamb to the Slaughter' Within this essay I will be comparing and contrasting the two detective stories 'The Adventures of the Speckled Band' and 'The Lamb to the Slaughter', referring to the structure, language and characterisation. 'The speckled band' was written in 1892 by Sir Arthur Doyle, he was qualified as a doctor which gave him a medical perspective for all his stories. 'The lamb to the slaughter' was written in 1952 by Roald Dahl most famous for writing children's stories although he did write adult material such as the book 'The lamb to the slaughter featured in 'The tales of the unexpected'. Detective stories mainly base themselves around solving murder cases; the reader is taken on a journey to find who is guilty and their motive which is normally along the lines of greed, loneliness and hatred. 'The speckled band' is written in 1st person and the story is narrated by Dr Watson, Sherlock's partner and dear friend. The story begins with Dr Watson looking over his old notes and introducing us to his views and feelings on Sherlock Holmes and his amazing talent for solving murder mysteries. We are taken back eight years to a case they solved. ...read more.

It is only broken down by the use of commas. Words and details are used beyond their need. There is a use of diction whose meanings have changed since time the story was written such as 'fantastic' which meant unreal, 'intimate' meaning close friend in the plutonic sense and e*********n meaning . He also uses individual words which manifold wickedness of human hard, 'horror' to emphasis the atmosphere. The language is typical of the Victorian era as everyone spoke very formally. The lamb to the slaughter has a lot shorter snappier sentences leaving room for imagination. In comparison to the speckled band it is a lot easier to follow and quicker to read. This allows the reader to imagine the story in their own way. The short sentences build up the tension bracing you for the sudden event. At the beginning of the story the sentences are slightly longer and more descriptive then the main section in the middle. 'The room was warm and clean, the curtains drawn, the two table lamps alight - hers and the one by the empty chair opposite.' The longer sentences at the beginning make the reader feel as thought they are there observing the description. The main characters in the speckled band are all portrayed as stereotypical men and women of the Victorian era with typical values of that time. ...read more.

There are more differences than similarities between these two stories this mainly lies on the fact that the stories where written 62 years apart. As the times changed so did literature, this was a result of people altering the way they spoke which in turn transferred into writing. What was typical of a detective story in the Victorian era is certainly not the same at present or when the lamb to the slaughter was written. If an author during the Victorian era wrote a story similar to Roald Dahl's with a wife murdering her husband it would not have been accepted and many would have been outraged. In the Victorian era femininity was extremely important women where like china dolls fragile, helpless, dependant on their 'owner' (men) and just for show. Violence was not accepted and evil was always defeated by good. Although detective stories of today can be extremely different to Sherlock Holmes, Connan Doyle's stories were important as they set the conventions for the detective story genre. I personally preferred The Lamb to the Slaughter because it was much more understandable therefore more enjoyable. Although Sherlock Holmes is a classic detective story and is a literary work of art I preferred the ability, given by The Lamb to the Slaughter to allow my imagination to lead the story. ...read more.