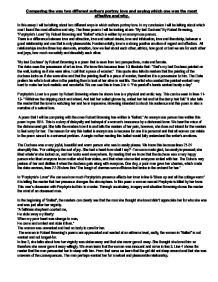 Comparing the way two different authors portray love and saying which one was the most effective and why.

Comparing the way two different authors portray love and saying which one was the most effective and why. In this essay I will be talking about two different ways in which authors portray love. In my conclusion I will be talking about which one I found the most effective and why. The three poems I will be looking at are- "My last Duchess" By Robert Browning, "Porphyria's Lover" By Robert Browning and "Ballad" which is written by an anonymous person. There is a difference between love and attraction, love and s****l desire, love and infatuation, love and friendship, between a good relationship and one that is only pleasurable. Fundamentally, love is a strong positive emotion of regard and affection. All relationships involve three key elements, emotion, how we feel about each other, ethics, how good or bad we are for each other and joys, how much we satisfy and dissatisfy each other. "My last Duchess" by Robert Browning is a poem that is seen from two perspectives, male and female. The duke sees the possession of art as love. We know this because lines 1-3 illustrate that- "That's my last Duchess painted on the wall, looking as if she were alive. I call that a piece of wonder." This quote also tells its readers that the painting of the duchess looks as if she were alive and that the painting itself is a piece of wonder, therefore it is a possession to him. The Duke prefers his wife to look alive in the painting then to look at her alive in real life. The artist who created the painted worked very hard to make her look realistic and wonderful. We can see this in lines 3 to 4- "Fr� pandolf's hands worked busily a day" Porphyria's Lover is a poem by Robert Browning where he shows love is a physical and erotic way. ...read more.

"I weep the past, I dread the gloom" That quote shows us that she really regrets her past and she also cries over it. By reading line 34 "Of sorrows in the time to come" we knowledge that she is going to suffer through her dreading her Childs future. Later on in the poem she realises that if she does commit suicide, it will only make matters worse and it will leave her child in the most unpleasant position- "Weeping on a strangers knee." As a result of her struggling to make decisions and regretting her past, in lines 43-44 "I wish our sorrows both away, our souls with god, our bodies clay," informs us that she is going to kill her self and the baby. This last part where the Duke tells the servant that he will easily get the next brides hand in marriage was a way for the Duke to tell the servant, "Now you know what exactly I want. I will marry her, it is a matter of her being tamed well as to whether or not I shall stay married to her". This is evident in; "Notice Neptune, though, Taming a sea-horse, though it a rarity" (54-55) Obviously, the Duke was a man who knew what he wanted and was ready to discard anything that didn't fit his wishes. The women in Robert Browning's poems were wanted however, the women in "Ballad" wasn't. We find out that the woman In "Ballad" became pregnant and became disowned in lines 7-8 "When it puckered up with shame, and I sought him, he never came." It tells us that when she became pregnant, she was also ashamed. After she found out, she suffered alone because when the farther of the baby found out he never returned to her. That means that for this couple love didn't exist and that when it did, it wasn't true. ...read more.

Another thing that I also liked about this poem was that contrasting images were used quiet a few times. This creates two different images to the reader and makes the poem more motivating to read. The ballad written is about a problem that many women experience so therefore I didn't find it that difficult to understand the point the author was trying to get through. Although the author did not want the readers to feel sorry for her, according to my judgment I think that it did grab a lot of reader's hearts. Something that all three poems have in common is that all three poems end up talking about death. Although we don't really know if the woman in "Ballad" kills herself or not, she does talk about it and it does seem as if though she is going to kill herself and the baby. The two poems written by Robert Browning were about men that didn't want their women to leave them and wanted them all to them selves, however, the ballad was the complete opposite. Once the man broke the women's virginity, he went away and rejected her. The man took advantage of the women and used her. In the ballad the love between the couple didn't last long, where as in Robert Browning's poem the love didn't seem to end. It nice to read something different and it is nice to read a poem, which is trying to tell a life story in a short version. On the whole, the ballad was very appealing because the woman managed to put up with her problems and came to a conclusion in the end, it was very engaging because I like to read about peoples problems, attention grabbing because it made you want to continue reading on and on and finally out of the ordinary because there are not so many poems out there that have such an emotionalised story behind it. The ballad represented a universal problem. Hitiksha Patel 10A ...read more.