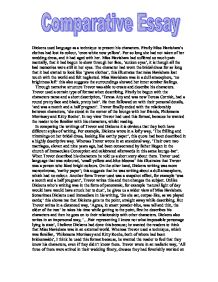 Comparing the writings of Trevor and Dickens.

Dickens used language as a technique to present his characters. Firstly Miss Havisham's clothes had lost its colour, 'once white now yellow'. For so long she had not taken of her wedding dress, and it had aged with her. Miss Havisham had suffered so much pain mentally, that it had begun to show through her face, 'sunken eyes', it is though all the bad memories were still in her eyes. The character had worn the bridal dress for so long that it had started to look like 'grave clothes', this illustrates that miss Havisham lost touch with the world and felt neglected. Miss Havisham was in a dull atmosphere, 'no brightness left' this also suggests the surroundings showed her inner somber feelings. Through narrative structure Trevor was able to create and describe his characters. Trevor used a certain type of format when describing. Firstly he begun with the characters name and a short description, 'Teresa Atty and was now Teresa Cornish, had a round pretty face and black, pretty hair'. He then followed on with their personal details, 'and was a month and a half pregnant'. Trevor finally ended with the relationship between characters, 'she stood in the corner of the lounge with her friends, Philomena Morrissey and Kitty Roche'. ...read more.

Dickens used broad language such as, 'I knew nothing then of the discoveries that are occasionally made of bodies buried in ancient times,' this shows me that his writing is strong and widely descriptive. On the other Trevor's writing is narrower, 'Their own two marriages, eleven and nine years ago, had been consecrated by father Hogan', by this I can tell that Trevor's thinking was not wide. Dickens and Trevor used environment to represent their characters. Dickens used the quote, 'No glimpse of daylight was to be seen in it'. This suggest that miss Havisham did not want any natural light in her room, she wanted to avoid the outside world, this was due to her not wanting anything bad happening again. Dickens also used the quote 'stopped, like the watch and the clock'; this could mean that Miss Havisham did not want to move on, which was her choice. The subject of marriage was a big thing for miss Havisham she was devastated when she was jilted on her wedding day which, left her to carry the bad memories. In Trevor's writing there was a similar problem with Loretta, but she did not want to preserve her bad memories, and wanted to move on, but community did not allow this. ...read more.

Another factor that is very similar is that in the 1970's women still wanted to get married 'In no way did Teresa love him', and alike to this in the 1800's marriage was not necessarily about love but about respectability 'Teresa had imagined her wedding'. The reasons behind both Dickens and Trevor's writings are pre-occupied with other issues. In Dickens writing, he was fascinated by the idea of time being frozen, and this was present in this quote, '...saw that her watch had stopped at twenty minutes to nine, and that a clock in the room had stopped at twenty minutes to nine'. I believe Dickens was trying to create an effect within the reader, so they were in touch with Miss Havisham's lifestyle. Other issues relating to this are that Dickens may have liked the idea of time being frozen and wanted to try it on his character. Trevor concentrated on certain individuals in society, especially those who were unhappily married. For example 'She'd fainted when it happened to herself, when he'd come at her like a farm animal. She'd fought like a mad thing'. This shows me that Trevor felt for women who were forced to get married, to someone they didn't want to. ...read more.