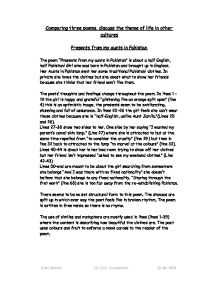 Comparing three poems, discuss the theme of life in other cultures.

Comparing three poems, discuss the theme of life in other cultures Presents from my aunts in Pakistan The poem "Presents from my aunts in Pakistan" is about a half English, half Pakistani Girl who was born in Pakistan and brought up in England. Her Aunts in Pakistan sent her some traditional Pakistani clothes. In private she loves the clothes but she doest what to show her friends because she thinks that her friend won't like them. The poets' thoughts and feelings change throughout the poem. In lines 1-19 the girl is happy and grateful "glistening like an orange split open" (line 4) this is an optimistic image, the presents seem to be exhilarating, stunning and full of assurance. In lines 20-26 the girl feels she can't wear these clothes because she is "half-English, unlike Aunt Jamila."(Lines 25 and 26). Lines 27-38 show two sides to her. One side by her saying "I wanted my parent's camel skin lamp." (Line 27) where she is attracted to but at the same time repelled from "to consider the cruelty" (line 29) ...read more.

I liked this poem because of the way she used colours and fruit to show the way in which the girl in the poem is feeling. I also liked how she describes the all the clothes. Charlotte O'Neil's Song The poem Charlotte O'Neil's Song is about a girl who is a servant in a mansion. She talks about her life "scrubbed.........scrapped.........washed........." and how she is getting bored of doing everything. The girl Charlotte O'Neil, according to ships records, is a 17-year-old girl sailing to New Zealand to be a general servant in a rich mans home. At the end she says "I won't be there anymore." and it seems she slams the door and she's gone. The mood of this poem is quite anger at the beginning and tired of doing the same job day in day out and at the end she glad she gone "but know you're on your own my dear." The structure to this poem is not set up in stanzas with set syllables and number of lines. ...read more.

"Before I see them, there will be crush ice white glass" then he takes us down the street to "working mans caf�" he backs away from the window and has a burning desire to smash the clear panes in any way which he can. The poet feeling and thoughts develop as the significantly during the course of the poem. From when the poem begins he's walking thought the fields and although the terrain is harsh and "hard" he feels comfortable there. He then walks down into district six and his anger begins to be revealed. Talks about his hands, bones, lungs and "hot, white inwards turning anger of my eyes." This surggests that he is beginning he is angry a bit but as the poem progresses the anger enhances with it. The three poems are about different cultures. I liked the nothings changed poem because it has the most effect on me. The way in which the poet unravels the plot gradually shows how much nothing has changed. Mike Baines G.C.S.E. Coursework 20 Jan 2004 ...read more.