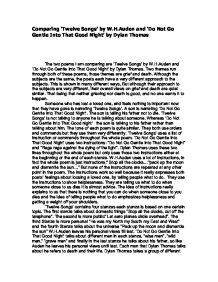 Comparing 'Twelve Songs' by W.H.Auden and 'Do Not Go Gentle Into That Good Night' by Dylan Thomas

'Twelve Songs' does not state the topic of grief he expresses it by telling people what to do, but grief is spoken about, not directly, but more than Dylan Thomas. Dylan Thomas uses metaphors of day/night and life/death. He refers to death as night 'Do Not Go Gentle Into That Good Night' he is saying do not die. 'Twelve Songs' does not use metaphors it just states the subject. Not only what is written in each poem is different but also the language and ways of writing are different. 'Do Not Go Gentle Into That Good Night' does not flow as easily as 'Twelve Songs.' Although there is a distinctive pattern throughout 'Do Not Go Gentle Into That Good Night' of "ABA", the first and the last line rhyme and the middle line of each stanza all rhyme, 'day', 'bay', 'way' and 'pray'. Twelve Songs does not have this continuous rhyming pattern. There are four lines in each stanza and all of them rhyme as in the first two lines rhyme and the last two lines of each stanza rhyme. In the first stanza the first two end 'telephone' and 'bone' and the last two end 'drum' and 'come'. This happens throughout the whole poem. This rhyming pattern helps the poem run smoothly and works very well. 'Do Not Go Gentle Into That Good Night' repeats lines throughout the whole poem whereas 'Twelve Songs' does not repeat at any point in the poem. Both of these methods work well. ...read more.

And although there may be wise men in the world they are never heard and what they say may be wise but it makes no impact on the world 'their words have forked no lightning' he mean that their words have not affected people and have not spread like lightning. From this analysis I have discovered that both these poems are very different. At first they seemed quite similar but looking deeper they are very different. W.H.Auden's aim was to tell people how hard it was to loose a loved one and grief. He got across this message by telling people what to do in a set of instructions. This was very effective and gave out that message to the reader. Dylan Thomas did not really give out a message to the reader apart from to put up a fight against death. His aim of begging his father not to die and to create an impact worked. He did use instructions but not in the same way as W.H.Auden, however his instructions did work as he used them to beg his father to 'not go gentle into that good night'. The main difference between these poems is that 'Twelve Songs' is about after death and 'Do Not Go Gentle In to That Good Night' is about before death. The main similarity is that they both use instructions and even though they use them very differently they are still very effective in both poems and are used well. Also both poems talk about personal feelings but only at the end. "I pray do not go gentle into that good night", and "I thought love would last forever I was wrong." ...read more.

This student written piece of work is one of many that can be found in our GCSE Dylan Thomas section.