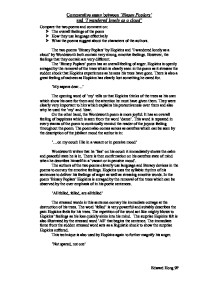 Comparing two poems - 'Binsey Poplars' by Hopkins and 'I wandered lonely as a cloud' by Wordsworth.

Compare the two poems and comment on: > The overall feelings of the poem > How they use language effectively > What the poems suggest about the characters of the authors. The two poems 'Binsey Poplars' by Hopkins and 'I wandered lonely as a cloud' by Wordsworth both contain very strong, emotive feelings. However, the feelings that they contain are very different. The 'Binsey Poplars' poem has an overall feeling of anger. Hopkins is openly enraged by the removal of the trees which is clearly seen in the poem as it stresses the sudden shock that Hopkins experiences as he sees his trees have gone. There is also a great feeling of sadness as Hopkins has clearly lost something he cared for. 'My aspens dear...' The opening word of 'my' tells us that Hopkins thinks of the trees as his own which show his care for them and the attention he must have given them. They were clearly very important to him which explains his protectiveness over them and also why he used the 'my' and 'dear. ...read more.

'All felled, felled, are all felled' The stressed words in this sentence convey his immediate outrage at the destruction of his trees. The word 'felled' is very powerful and suitably describes the pain Hopkins feels for his trees. The repetition of the word act like mighty blows to Hopkins' feelings as his loss quickly sinks into his mind. The surprise Hopkins felt is also illustrated by the stressed word 'All' that begins the sentence. The immediate force from the sudden stressed word acts as a linguistic shock to show the surprise Hopkins suffered. This technique is also used by Hopkins again to further magnify his anger. 'Not spared, not one' The feeling of anger is emphasised from the repetition of the word 'not'. The clear and harsh sound of the word depicts his convinced feelings of outrage and the repetition of the word accentuates the confidence and fury in Hopkins. Additionally, the first part of the sentence has one stressed syllable while the second part has two stressed syllables. ...read more.

The vast number of daffodils is further magnified with the use of run-on-lines. 'They stretched in never-ending line Along the margin of a bay' The run on line here further exaggerates the number of plants as well as the fact that the daffodils are '...stretched in never-ending line...' The 'Binsey Poplars' poem contains a lot of anger and rage, this reflects on the author, Hopkins. So, from this poem we can see that the character of Hopkins can be very hot-tempered and vengeful. However, the fact that he acted in this outraged fashion means that he cared for the trees very much and therefore we see a loving and caring side to Hopkins. On the other hand, Wordsworth does not show any anger in his poem but only positive feelings such as happiness and elation. In conclusion, we can see that the two poems differ greatly in the feelings they project through mood and literacy devices. However, the poems do have one thing in common in that they both portray the same sentient of concern over plants that the authors clearly care a lot about. Comparative essay between 'Binsey Poplars' and 'I wandered lonely as a cloud' Edward Hong 9P ...read more.