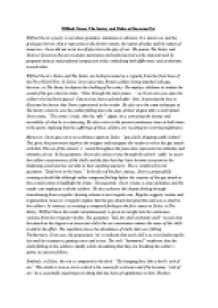 ﻿Wilfred Owen: The Sentry and Dulce et Decorum Est Wilfred Owen?s poetry is not about grandeur, dominion or altruism. It is about war and the grotesque horrors that it represents to the former nation, the nation of today and the nation of tomorrow. Owen did not write in self-pity but in the pity of war. His poems The Sentry and Dulce et Decorum Est are resonant, portentous and multi-layered works characterised by poignant honesty and profound compassion whilst embodying both differences and similarities to each other. Wilfred Owen?s Dulce and The Sentry are both presented as a vignette from the front lines of the First World War. In Dulce, Owen describes British soldiers being attacked with gas, however, in The Sentry he depicts the shelling of his sentry. He employs sibilance to imitate the sound of the gas when he states, ?Dim, through the misty panes?? as Owen sets eyes open the soldier who had been gassed. Caesura has been exploited after ?dim?, fracturing the line to illustrate the horror that Owen experienced to the reader. He also uses the same technique in The Sentry when he sees the soldier falling down the steps of their dugout after a shell attack. ...read more.

?Bitter as the cud? further reinforces this as chewing the cud is what a cow does when it regurgitates grass it has eaten and chews it again to extract more nutrients. This is a metaphor for the soldiers ?retasting? their ?bitter? memories that the survivors and Owen himself will have. The simile that on the surface seems to be ordinary is in actuality tainted and warped, symbolising the breakdown of society and propaganda that shows a romantically valiant war. The quotation ??I see your lights? ? But ours had long gone out?? displays Owen?s haunting recollection is of the sentry?s voice, shouting through the calamity caused by the exploding shells that he is insisting he can see to reassure both his fellow soldiers and himself. Owen combines a dialogue and a description to achieve a dramatic effect; in the last couplet, the compassion for the sentry lies in the poetic juxtaposition of his direct and optimistic speech. The compassion proceeds from the dramatic irony at the sentry?s disadvantage. The sentry, being blind does not know unlike his fellow shoulders that the lights ?had long gone out.? As they can see for themselves, his boldness has an unintended consequence: it revealed his honourable pretence that he can see too. ...read more.

Regular would suggest routine and that he wants the war to continue and irregular would suggest that he wants all wars to come to a halt. It could be interpreted that the last line does not rhyme as the metrical structure represents society and when Owen leaves iambic pentameter he is representing the breaking down of society like he feels it is not worth the effort to place the words within the proper metrical structure of his poem. Owen?s poem was aimed at individuals high in society who had the power to make a difference which is why it was written in Latin. The Latin phrase can also be changed and rearranged to make sense and mean exactly same like war itself. War can be changed but it will always be futile. In The Sentry, the rhyming scheme is entirely irregular; showing the event in the Boche Dugout is completely out of their routine. Moreover, -Iambic Pentameter (The politeness with which the blinded sentry addresses his commanding officer (?O sir?) stands in ironic juxtaposition to his repeated realisation that he has lost his sight, thereby inspiring a deep pity for him.) -Enjambment * gas shells dropping softly suggests a menace stealthy and devilish. ...read more.