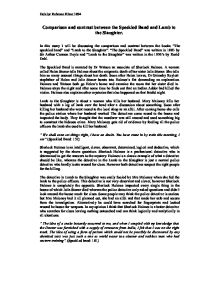 Comparison and contrast between the Speckled Band and Lamb to the Slaughter.

Comparison and contrast between the Speckled Band and Lamb to the Slaughter. In this essay I will be discussing the comparison and contrast between the books "The speckled band" and "Lamb to the Slaughter". "The Speckled Band" was written in 1883 by Sir Arthur Connon Doyle and "Lamb to the Slaughter" was written in the 1950's by Roald Dahl. The Speckled Band is narrated by Dr Watson an associate of Sherlock Holmes. A woman called Helen Stoner tells Holmes about the enigmatic death of her sister Julia Stoner. She tells him so many unusual things about her death. Soon after Helen leaves, Dr Grimsby Roylott- stepfather of Helen and Julia Stoner bursts into Holmes's flat demanding an explanation. Holmes and Watson both go Helen's home and examine the room that her sister died in. Holmes stays the night and after some time he finds out that an Indian Adder had killed the victim. Holmes also explains other mysteries that also happened on that fateful night. Lamb to the Slaughter is about a woman who kills her husband. Mary Maloney kills her husband with a leg of lamb over the head after a discussion about something. Soon after killing her husband she went round to the local shop as an alibi. After coming home she calls the police station where her husband worked. The detectives come round to the house and inspected the body. ...read more.

Oddly enough both murders happened at night where nobody else could see. Unfortunately Dr Grimsby Roylott gets caught and also dies; however Mary Maloney got away with the murder. It is often said that men are usually the criminals in every crime but in Lamb to the Slaughter it is different. The world's worst murderer is a man so this shapes what people think. In my opinion I think that both male and female are capable of doing these horrible crimes against people, whether they know them or not. Mary Maloney is a very clever person whereas Dr Grimsby Roylott isn't. Mary Maloney had everything planned, she had an alibi ready after killing her husband so that she would be not held responsible, whereas Dr Grimsby Roylott left traceable clues to what he was doing, like keeping a whip and milk in his room. Mary Maloney is the cleverer out of the two criminals. The victim in the Speckled Band was the stepdaughter of the criminal, Julia Stoner whereas the victim in the Lamb to the Slaughter was the husband of the criminal, Patrick Maloney. Both Julia and Patrick were killed at night at home. Julia Stoner was killed by her stepfather while she was sleeping; her father killed her with an exotic Indian snake whereas Patrick Maloney was killed by his wife. Mary Maloney killed him with the leg of a lamb; she hit him so hard over the head that he instantly died. ...read more.