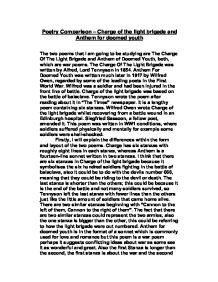 Comparison: Anthem for doomed youth, Charge of the light brigade

Poetry Comparison - Charge of the light brigade and Anthem for doomed youth The two poems that I am going to be studying are The Charge Of The Light Brigade and Anthem of Doomed Youth, both, which are war poems. The Charge Of The Light Brigade was written by Alfred, Lord Tennyson in 1854. Anthem For Doomed Youth was written much later in 1917 by Wilfred Owen, regarded by some of the leading poets in the First World War. Wilfred was a soldier and had been injured in the front line of battle. Charge of the light brigade was based on the battle of balaclava. Tennyson wrote the poem after reading about it in "The Times" newspaper. It is a lengthy poem containing six stanzas. Wilfred Owen wrote Charge of the light brigade whilst recovering from a battle wound in an Edinburgh hospital. Siegfried Sassoon, a fellow poet, amended it. This poem was written in WW1 conditions, where soldiers suffered physically and mentally for example some soldiers were shell-shocked. Firstly, I will explain the differences within the form and layout of the two poems. Charge has six stanzas with roughly eight lines in each stanza, whereas Anthem is a fourteen-line sonnet written in two stanzas. I think that there are six stanzas in Charge of the light brigade because it symbolises the six hundred soldiers fighting in the ...read more.

I think that Lord Tennyson compares the soldiers to animals by saying, "Flashed all their sabres bare" He could be saying they fight like animals by flashing their teeth, also fighting to the death. In anthem for doomed youth it says, "What candle may be held to speed them all?", Although candles are lit when a person dies, the light represents life, and the wax melts away like our lives - until the flame eventually goes out. We have seen that Charge Of The Light Brigade rejoices the bravery and nobility of the soldiers and Anthem For Doomed Youth is explaining the concern of the innocent losing lives. The start of Charge of the light brigade gives off a sense of encouragement towards the brave soldiers. It says "half a league onward". This shows us that even though they only have half a squad, they are still charging towards the enemy. Also it says, "Rode the six hundred", this also proves that they didn't just walk in to the opposition, but they rode in, fearless. The text also says "Charge of the guns", this goes on to show that they went in with all guns blazing and showing their courage. The tone of Anthem for doomed youth is the complete opposite to charge of the light brigade. ...read more.

It does this to ask the world the question that they already know, used to remind the world of what is going on. Alfred Lord Tennyson wrote charge of the light brigade after reading a newspaper article about it. This could be biased towards the poems content, because newspapers don't always tell the truth. Also he could have been biased not to ruin his reputation because if he was already a famous poet. Wilfred Owen wrote Anthem for doomed youth whilst in an Edinburgh hospital recovering from shell shock. This could've altered his attitudes to the war. Also the fact that Alfred Lord Tennyson had never been to war and that Wilfred Owen had could have altered their attitudes. The Use of exclamation marks in Charge of the light brigade could make the reader imagine the soldiers shouting out for help and urgency, the text says, "Forward, the light brigade!" This shows that it is an urgent command. Also the repetitive rhythm sounds like horses galloping. In Anthem for doomed youth, it says, "Rifles' rapid rattle." This echoes the sound of the rifles. Although the two poems are about war, the content is very different because they were written by two different people, one that had been to war and one that hadn't. The context and date might affect the poems because between the two there were great social changes. I think Charge of the light brigade was more affective because it was more positive. ...read more.