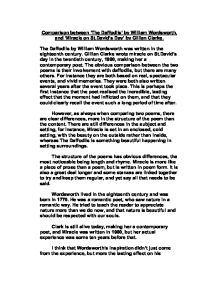 Comparison between 'The Daffodils' by William Wordsworth, and 'Miracle on St.David's Day' by Gillian Clarke. The Daffodils by William Wordsworth was written in the eighteenth century. Gillian Clarke wrote miracle on St.David's day in the twentieth century, 1980, making her a contemporary poet. The obvious comparison between the two poems is their involvement with daffodils, but there are many others. For instance they are both based on real, spectacular events, and vivid memories. They were both also written several years after the event took place. This is perhaps the first instance that the poet realised the incredible, lasting effect that the moment had inflicted on them, and that they could clearly recall the event such a long period of time after. However, as always when comparing two poems, there are clear differences, more in the structure of the poem than the content. There are still differences in the subject and setting, for instance, Miracle is set in an enclosed, cold setting, with the beauty on the outside rather than inside, whereas The Daffodils is something beautiful happening in setting surroundings. The structure of the poems has obvious differences, the most noticeable being length and rhyme. Miracle is more like a piece of prose than a poem, but is written in poem form. It is also a great deal longer and some stanzas are linked together to try and keep them regular, and yet say all that needs to be said. ...read more.

In the first stanza, an idyllic country scene is portrayed, and the general mood is quite romantic. "The path treads the sun among cedars" Clarke uses good personification in this stanza, to set the scene, and to give us a clear introduction to the daffodils. "Open-mouthed with daffodils". It gives us the first clue that perhaps there may be something to be more wary about. "It might be a country house" Stanza two tells us the true character of the building, and ruins the idyllic scene, and keeps very blunt with the description. "I am reading poetry to the insane" This being the first mention of there being something more to the building, we are shocked by not only the change of scene, but by the bluntly, and lack of description. It also introduces us to the patients, and there is almost a hint of humour when Clarke describes "An old woman, interrupting, offers as many buckets of coal as I need", which shows the state of the patients. The poet in this stanza also tells us of one particular patient, and this almost begins to rekindle the lost hope of the perfect scene portrayed. "A beautiful chestnut-haired boy" However, Clarke once more is very blunt when showing us the reality, "A schizophrenic", And then smoothly runs into the next stanza, using a linked line. "A schizophrenic-on a good day, they tell me later" In the next stanza, stanza three, the description of the patients is continued. ...read more.

The poem starts off quickly but then there is a pause between the fifth and sixth stanzas, and the end of the poem is very slow and thoughtful. The narrative voice in both poems is in the poet, in the first person, the poet being the person who sees the scene. It is also the person who describes it all to us. The language in The Daffodils is incredibly descriptive, all the way through the poem, especially when describing the daffodils themselves. It helps create a warm, sunny mood and atmosphere. The poem runs fairly slowly which is created using dashes "I gazed-and gazed-but little thought" In stanza one, "I wandered lonely as a cloud That floats on high over vales and hills, When all at once I saw a crowd A host of golden daffodils, Beside the lake, Beneath the trees, Fluttering and dancing in the breeze." The mood is set, airy and aimless. We also feel drifting with the poem. One of the main points made in this stanza, is the vastness of the daffodils "a host of golden daffodils". Stanza two, "Continuous as the stars that shine And twinkle on the Milky Way, They stretched in never-ending line Along the margin of a bay: Ten thousand saw I at a glance, Tossing their heads in sprightly dance." Also conveys a shining, bright atmosphere, and continues the point of the huge number of the daffodils "Ten thousand". The poet uses similes and metaphors to describe the scene. The poet also uses personification to show the movement and actions of the vast number of daffodils ...read more.