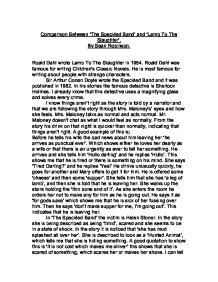 Comparison Between 'The Speckled Band' and 'Lamb To The Slaughter'. By Sean Robinson. Roald Dahl wrote Lamb To The Slaughter in 1954. Roald Dahl was famous for writing Children's Classic Novels. He is most famous for writing about people with strange characters. Sir Arthur Conan Doyle wrote the Speckled Band and it was published in 1982. In his stories the famous detective is Sherlock Holmes. I already know that this detective uses a magnifying glass and solves every crime. I know things aren't right as the story is told by a narrator and that we are following the story through Mrs. Maloney's' eyes and how she feels. Mrs. Maloney talks as normal and acts normal. Mr. Maloney doesn't chat as what I would feel as normally. From the story his drink on that night is quicker than normally, indicating that things aren't right. A good example of this is; Before he tells his wife the bad news about him leaving her 'he arrives as punctual ever'. Which shows either he loves her dearly as a wife or that there is an urgently as ever to tell her something. He arrives and she tells him 'Hullo darling' and he replies 'Hullo'. ...read more.

He became the 'terror' of the village. He is a violent man as he 'hurled the local blacksmith'. He had a passion for Indian animals. That is why he kept a snake as a pet. A good description of him is that he was 'a huge man...face barked with every evil passion, he had bile shot eyes'. This describes to me a kind of monster. He resembled 'a fierce old bird of prey'. Which shows how evil he is. He is an impatient man as he 'strode out of the room'. The murder in The Speckled Band is planned for years. The planning of the murder and attempted murder involved the placing of an air vent, fake bell pull and bolting the bed to the floor. Dr Roylott had to train the snake to do as he wanted and make sure the snake would not bite him. Dr Roylott murdered her for money. This makes me have little respect for Dr Roylott as he had no reason at all to kill her and he has no sympathy from me at all. In The Lamb To The Slaughter Mary is just sitting on her own, sewing. The house seems to be quiet as she is in on her own. ...read more.

I also thought when she offers to make his supper and she comes back up, just before she hits him when he orders her 'not to make any for him'. The Speckled Band was exciting. The most exciting part was when the body was discovered. To make me want to read on was when 'we had no feeling of security unless our doors were locked'. Another exciting part was when the speckled band was reveled as a 'swamp adder'. I know that the Speckled Band was set in Victorian times as 'the windows are blocked by old-fashioned shutters with broad iron bars. This shows the age of the building. In Lamb To The Slaughter there is an atmosphere of modern day language so I get the automatic feeling of this being a modern book. I don't find it too unusual at there being no female detectives as this could be coincidence or this could be classed as a 'male' job. I think that 'THE SPECKLED BAND' was my favorite as it kept me in suspense. It made me eager to read out and find out why and how she is killed. Holmes doesn't tell us or Watson that he knows. Throughout the story we get little clues as to what it could be that killed Julia. People will always read murder mysteries as these add excitement into books and they influence new and better books being brought out. ...read more.