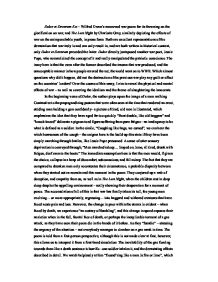 Dulce et Decorum Est - Wilfred Owen's renowned war poem for its frowning on the glorification on war, and The Last Night by Charlotte Gray, similarly depicting the effects of war on the unimpeachable youth, in prose form. Both are excellent representations of the devastation that war truly is and can only result in, and are both written in historical context, only Dulce et Decorum preceded the latter. Dulce directly juxtaposed another war poet, Jessie Pope, who romanticized the concept of it and really manipulated the patriotic conscience. The irony here is that the even after the former described the trauma that war produced, and the unacceptable manner in how people revered the act, the world went on to WWII. Which almost questions why did it happen, did not the destruction of the previous war play any guilt or effect on the countries' leaders? Over the course of this essay, I aim to reveal the physical and mental effects of war - as well as covering the idealism and the theme of slaughtering the innocents. In the beginning verse of Dulce, the author plays upon the image of a man walking. Contrastive to the propagandizing posters that were often seen at the time that rendered an erect, striding man holding a gun confidently- a picture of tired, old men is illustrated, which emphasizes the idea that they have aged far too quickly. ...read more.

One can only imagine their befuddlement when arriving to the trenches and wondering where their accommodation was. As continued from the previous, their mental velocity increased tremendously when in the face of adversity and death. This can only be expected, and is marked by the "Gas! Gas! Quick, boys!". The mental anguish when they see their peer suffer but are utterly of no use in this is astounding, and the scene runs almost as a nightmarish sequence, as signified by "Dim through the misty panes, and thick green light. In all my dreams before my helpless sight.". The dramatic verb drown is used, and they watch their former companion die in the sea of gas, they having escaped the same fate by only a second or two. This fact is enough to leave them in a state of momentary shock, and in the future, a play back of this episode is probably revisited by every soldier who saw the sight and regretted having being unable to help him in any way - the same shock was experienced when all the Jews realized their time had come: "a quickening of muscle and nerve" in The Last Night. Through each line, we must remember whom the poem was addressed to, and we can sense some underlying bitterness. The triplet "guttering, choking, drowning" throws itself out with a dynamic impact. ...read more.

If they haven't learnt simple motor skills, how can they be expected to react to a gas attack? The pure horror of it can never be condensed - it is like those horror stories materialized. Dulce and The Last Night are both classic pieces of history, genuine and likely more realistic records of those corrupt events that hopefully will not happen ever again. They are both timeless, and dark reminders of why war shouldn't happen, although pain is still inflicted, every second. These two pieces are a reminder that pain can never truly be prevented as that is how a few are wired to work - and these few have the power to influnce many others. However, the main point the pieces try to bridge across is the innocence of the fighters - who are more like pawns or victims - and the superfluous glorification of war. Something that pains another should never be laughed or promoted in any form, as fundamentally, we are one species, we are the same, as Shylock in the Merchant of Venice so eloquently expressed. The quotation "Do unto others as others would do unto you," applies to both concepts the writers try to draw, but in the end, the sadness in both renditions of war is the dehumanization and of course, the gruesome massacres, but mostly, the indifference. The indifference of the bystanders as well as the leaders. ...read more.