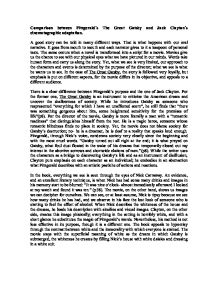 Comparison between Fitzgerald�s The Great Gatsby and Jack Clayton�s cinematographic adaptation. A good story can be told in many different ways. That is what happens with our oral narrative. It goes from mouth to mouth and each narrator gives to it a teaspoon of personal taste. The same occurs when a novel is transformed into a script for a movie. Movies give us the chance to see with our physical eyes what we have pictured in our minds. Words take human form and carry us along the story. Yet, what we see is very limited, our approach to the characters and events is determined by the purpose of the director; what we see is what he wants us to see. In the case of The Great Gatsby, the story is followed very loyally, but emphasis is put on different aspects, for the movie differs in its objective, and appeals to a different audience. There is a clear difference between Fitzgerald's purpose and the one of Jack Clayton. For the former one, The Great Gatsby is an instrument to criticize the American dream and uncover the shallowness of society. While he introduces Gatsby as someone who respresented "everything for which I have an unaffected scorn", he still finds that "there was something gorgeous about him, some heightened sensitivity for the promises of life"(p8). For the director of the movie, Gatsby is more literally a man with a "romantic readiness" that distinguishes himself from the rest. ...read more.

Although the story in the movie is presented by Nick in first person narrative, the movie's structure has more to do with the structure of a comic series, where the narrator is only an introduction to the setting and/or the action taking place. Whilst in the book Nick is a filter through which we receive an account on the events, in the movie his intervention between us and the story is very little; he abandons his "outsider" perspective and plays here a character in his own. This is a resource used by Clayton to emphasize again the importance of each character, including his narrator, as an individual. When drunk, sad or happy, it is not through his voice (internal) that we get to know about his state, but through observing externally his actions and judging for ourselves. Whenever he makes an assumption in the book "Now it was again a green light on a dock. His count of enchanted objects had diminished by one" (p90), Clayton replaces that thought for an action in itslef, an action in which Nick has no intervention, the sad look in Gatsby's eyes is something we become aware ourselves, with no need for words. This happens very often, another example is when Nick narrates the moment when, five years ago, "he kissed her"(p107). Clayton replaces this thoroughly described moment and all its mistery with a romantic dreamlike environment created by Gatsby and Daisy in their moments of reminiscense: D:-"I wish you had your uniform G:-"I do still have my uniform D:-"Then, you are a sentimental man". ...read more.

Its second appearance is toward the end, when Daisy is gone forever. Gatsby turns back hoping to find her there, he calls out her name, but the dream is over; the bird flies away abruptly. There is a saying in my country: "bird that ate, flew away". This could be a second interpretation, although not as romantic. Movie and book tell the very same story in very different ways, making emphasis in what will contribute to achieving their respective purposes. Both of them are very successful in that and, whatever the choices and changes made by Clayton, they can be easily indulged for he presents to us another aspect of Great Gatsby: the greatness of his individuality. Gatsby dies and is purified, he is a romantic heroe that needs no excuse for he has lived a life in pursue of a dream, which he owns. Both writer and director condemn this illusion: one sceptically calls it hope, the other very superficially calls it love. Fitzgerald lies the blame on society: society killed Gatsby's dream and with it, everything that Gatsby meant. Clayton portrays him as this romantic figure who gives up everything for an illusion. Yet, his means to reach that blind illusion that has no shape nor content any more, that something that was but will never be again, are very distorted in the context of his humanity. What makes him such a special individual is, ironically, what erases any individuality in him, what in the end, kills him for he has no aim any more. ...read more.

There are some excellent points made in this essay and consideration of the writer's purpose and the director's choices are analysed in detail.