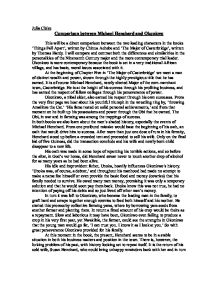 Comparison between Michael Henchard and Okonkwo

Julia Cloke Comparison between Michael Henchard and Okonkwo This will be a direct comparison between the two leading characters in the books 'Things Fall Apart', written by Chinua Achebe and 'The Major of Casterbridge', written by Thomas Hardy. I will compare and contrast both the differences and similarities in the personalities of the Nineteenth Century major and the more contemporary trial leader. Okonkwo is more contemporary because the book is set in a very traditional African village, and has basic, moral issues associated with it. At the beginning of Chapter Five in 'The Major of Casterbridge' we meet a man of distinct wealth and power, shown through the highly prestigious title that he has earned. It is of course Michael Henchard, newly elected Major of the corn-merchant town, Casterbridge. He is at the height of his success through his profiting business, and has earned the respect of fellow colleges through his perseverance of power. Okonkwo, a tribal elder, also earned his respect through his own successes. From the very first page we hear about his youthful triumph in the wrestling ring by, 'throwing Amalinze the Cat.' 'His fame rested on solid personal achievements,' and from that moment on he built up his possessions and power through the Obi that he owned. ...read more.

When told by the priest he must, 'bring to the shrine...one hen...and a hundred cowries,' for beating his second wife during the week of peace, Okonkwo feels hard done by. He feels that the priest doesn't understand the reasoning behind it and that if he did, he would surely have not punished Okonkwo. Okonkwo, 'was not the man to go about telling his neighbours he was in error.' Henchard's first major battle to contend with is the competition and threat posed by the young, keen and intelligent Scots man, Farfrae. Farfrae decides to set up business to directly rival that of Henchard's. This threat intimidates the insecure Henchard because he sees Farfrae to be undermining him and undoubtedly wants all the glory for himself. I think that this threat is all in the mind of Henchard and that it is really a case of Henchard's pride, always wanting to be the best at everything. He may feel intimidated by Farfrae's intelligence, something that Henchard lacks and is naturally jealous of. This jealously makes Henchard feel insecure about his own successes, and forces him to lash out at his workers and villagers. Impulsive reactions to his workers often end in sharp, rude remarks that offend and frighten his workers. When Abel Whittle was late for work one too many times, Henchard decided to make an example of him and humiliate him in front of everyone to teach him a lesson. ...read more.

His thinking seems to be governed, at least in part, by the survival of the clan and restoration of traditions. He takes his own life to show the clan that they must keep the traditions alive if they want to survive in this world. 'It is an offence against the Earth...for a man to take his own life,' and so, 'his body is evil...only strangers may touch it.' Although such a loss to the clan tortures the men, it also shows them that they must follow the traditions of their elders, being that they cannot bury him for he has committed a deadly sin. A sin the other tribe men will have to cleanse. To shed blood on the clan is considered the ultimate crime as it is contradictory to everything else you are ever taught. His death is also pay back on the white people to show them the horrific atrocities they have enforced on the land and how they have destroyed the lives of many black Nigerians. He also wants to frustrate the white man by not telling then the message, found in the book. Throughout the two books you find many instances where both men are forced to express their emotions violently in many occasions and most definitely domineering. Each challenge that the pair faces seems to unleash even more of this inner demon, as if a chord inside them is slowly snapping under the constant demands. ...read more.